Davido, the singer, says Cubana Chief Priest, the nightlife promoter, has been released — a few days after he was reportedly arrested by the Economic and Financial Crimes Commission (EFCC).

Reports had surfaced on Saturday night that the socialite, whose real name is Pascal Okechukwu, was arrested by the commission over allegations of tax fraud.

He was said to have been apprehended at the Nnamdi Azikiwe International Airport in Abuja on Wednesday.

Although the commission is yet to officially confirm his arrest, the socialite was last seen publicly on Tuesday at the Moshood Abiola National Stadium, Abuja, during a FIFA World Cup playoff match between Ghana and Nigeria.

His days-long hiatus on Instagram has continued to elicit concerns over his whereabouts among fans and colleagues in the entertainment industry.

But in a post via his Instagram story on Monday night, the ‘OBO’ crooner said the socialite — who he referred to as “my bestie”– has regained freedom.

“My bestie is free!! @Cubana chief priest,” he wrote in the terse post. 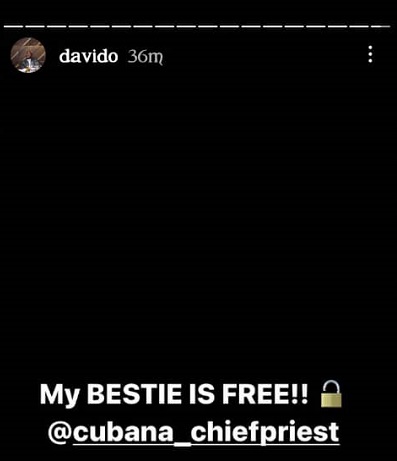 He, however, did not provide further details about when he was released.

When contacted by TheCable Lifestyle, Wilson Uwujaren, EFCC spokesperson, declined to comment on the matter. He, however, promised to revert later.

Nigeria’s ‘The Milkmaid’ loses out on Oscars 2021 shortlist

Tagbo’s family: There’s more to his death, we now have a clearer picture

Sonia Morales: Why I can’t date a broke man