Usman, brother to Abba Kyari, the embattled deputy commissioner of police (DCP), has deleted all posts — including photos and videos — on his Instagram page.

The development comes hours after TheCable Lifestyle did a report on his sleek personality on the Facebook-owned platform.

Before now, Usman’s page was littered with photos of himself clad in nicely-fitted classy outfits as well as a collection of several expensive cars.

The page, which currently has over 2,000 followers, had also contained photos of Usman with Abba as well as Usman Alkali Baba, the inspector-general of police (IGP), among others.

But as of the time of filing this report, the Instagram handle is blank with no single post on it.

“No posts yet. When usmankyari_ posts, you’ll see their photos and videos here,” a terse note on the page read. 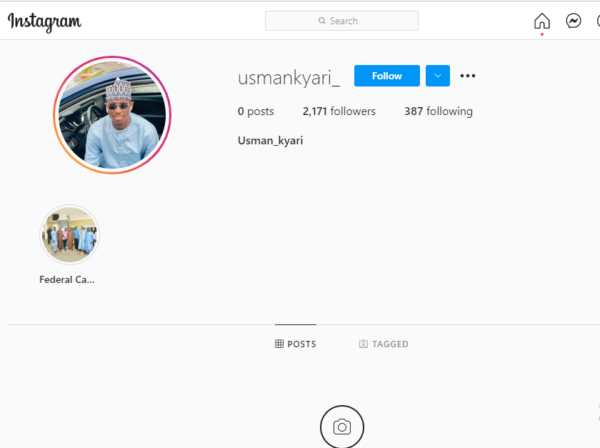 He, however, left old clips of his embattled brother addressing his critics on his Instastories.

His Instastories also contained a quote from DCP Kyari’s earlier statement denying the bribery allegation against him by Hushpuppi, the embattled socialite.

The spotlight recently beamed on Usman’s brother after Hushpuppi, whose real name is Ramon Abbas, alleged that he bribed him to arrest a co-fraudster.

But the crack investigator denied Hushpuppi’s claim, stating that he did not receive any money as alleged.

Amid the ensuing drama, the IGP had ordered an internal probe of the allegations against Kyari.