Davido, a multiple-award winner, says ‘FEM’, his hit single, became the protest song during the #EndSARS campaign because it resonated with the feelings of demonstrators at the time.

Nigerians had in October thronged the streets to demand an end to police brutality and excesses of operatives of the now-disbanded special anti-robbery squad (SARS).

During the peak of the protest, ‘FEM’, which means shut up, became a sensation and was used by demonstrators to shush individuals or groups whose commentaries are unsolicited.

TheCable Lifestyle had reported how protesters shushed Babajide Sanwo-Olu, governor of Lagos state, with the track while he was addressing them.

In an interview with Rolling Stone, an American magazine, the ‘OBO’ crooner said the song, released before the protest, was used by many Nigerians to express their anger about the situation of things in the country. 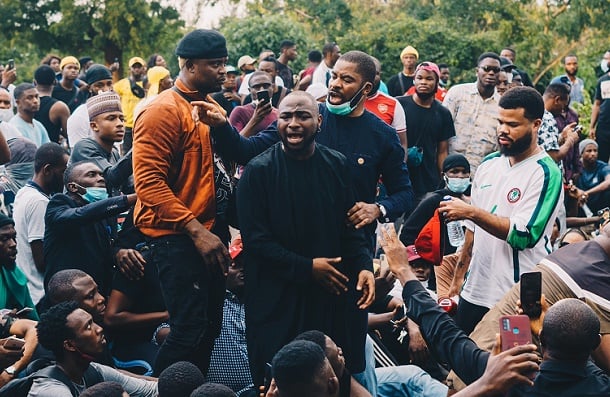 “I didn’t even make that song thinking all that was going to happen. I dropped the record like a month before the protests started, and it just fell in tune to what people were feeling at the time,” he said.

Davido also expressed excitement that Nigerians are gradually waking up to demand for meaningful change in the country.

“It’s crazy how everything fell into place. I can’t say I’m happy that us Nigerians have been pushed to the wall to be protesting, but also I can say that I’m pleased to have my song be a tool and a voice for them to just spill out their anger and just release stress. It was a good feeling,” he added.

I will make sure Psquare reunites, says Daddy Showkey