David Adeleke, Nigerian record producer better known as Davido, has visited the dentist for teeth whitening — a few weeks after he had vowed to quit smoking.

The 26-year-old singer recently shared a slew of pictures on his Instagram story, where he is seen lying on a chair — with his entourage waiting for him as he undergoes laser treatment.

Following the path of Don Jazzy, who recently marked one year without smoking, Davido had taken to social media platforms in September, where he pledged to quit cigarettes soon. 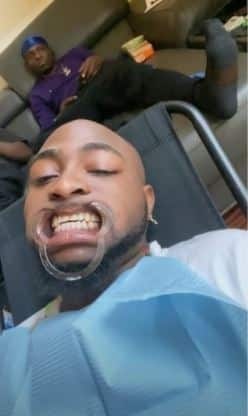 His lifestyle adjustments come amid his blossoming relationship with Chioma Avril Rowland, his wife-to-be, with whom he now has a child, and plans to tie the knot with in 2020.

Davido recently came under attack after he arrested two ladies who had wrongly claimed he impregnated them.

He had also threatened to file a N30 billion lawsuit against the duo and engaged a political commentator, who had reprimanded him for publicly parading the girls in a fierce exchange of words.

“It pains you that someone half your age can give birth too, is greater than you will ever be. You are a loser, a disappointment. You’re useless! Now keep my family name out your mouth! Your whole life earning no reach 30 percent of my show money. And it hurts, I know,” Davido had written Kayode Ogundamisi.

Burna Boy: I’ll put my money on Nasty C over any US rapper