In a now-deleted tweet, Burna Boy on Sunday revealed that he will release a new album before the end of the year.

A fan had asked if an album is to be expected from him in 2021, and the Grammy-winning singer said: “Same time as last year. No worry.”

His response suggested that he might put out a sixth album in August 2021, given that ‘Twice As Tall‘ was released on August 14, 2020. 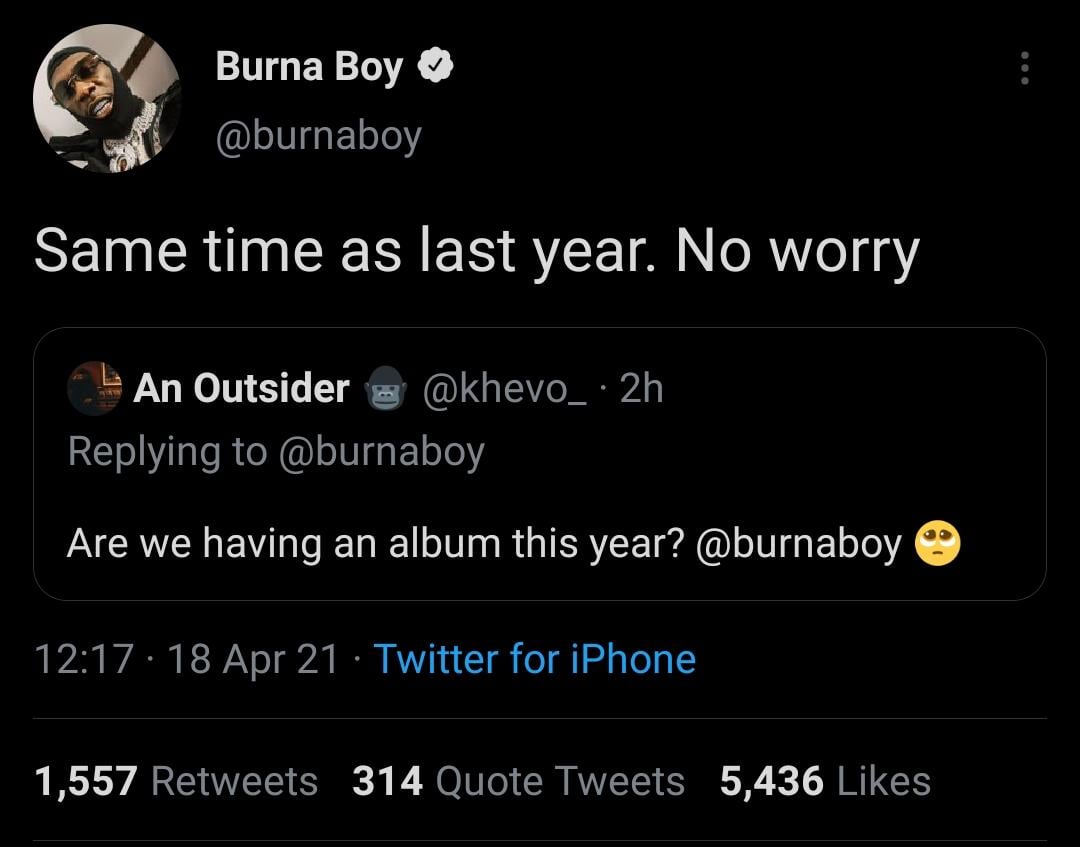 Burna Boy also posted a string of tweets written in Pidgin English. In one, he revealed that he is currently on the lookout for a young singer who shares similar ideals as him. The ‘Ye’ singer said he will mentor and “hand over” to the person.

“I dey pray for just one young nigga wey get my spirit make I hand over give am. I know say God go lead me to am soon,” the tweet read.

I dey pray for just one young nigga wey get my spirit make I hand over give am. I know say God go lead me to am soon.

Burna Boy rose to prominence in 2012 after releasing ‘Like to Party’, the lead single from his debut album ‘L.I.F.E’. In 2017, he signed with Bad Habit/Atlantic Records in the US and Warner Music Group internationally.

His third studio album, ‘Outside’, marked his major label debut. In 2019, he won ‘Best International Act’ at the BET Awards and was announced as Apple Music’s Up Next artist. His fourth album ‘African Giant’ came in July 2019.

The project won ‘Album of the Year’ at the 2019 All Africa Music Awards and was nominated for ‘Best World Music Album’ at the 62nd Annual Grammy Awards in 2020. He was awarded the ‘African Artiste of the Year’ gong at the 2020 VGMAs.

In 2021, his ‘Twice as Tall’ record was nominated for the 63rd Grammys, making him the first Nigerian with back-to-back Grammy nominations — and during the award ceremony in March, he won his first-ever grammy plaque.