A Twitter user had accused Deji of trying to reveal some secrets that Chichi told him about herself.

The user also claimed that he wanted to leak a nude video of Chichi where she showed him her body during a video call.

“The secret is her age and nudes she showed him on WhatsApp call when he travelled to USA. #BBNaija and all the runs she did in the past,” she wrote.

“If I am Chichi, let her allow him expose her. He will be the one people will drag because nobody likes a snitch @Deji_Morafa @chichiofficiall.” 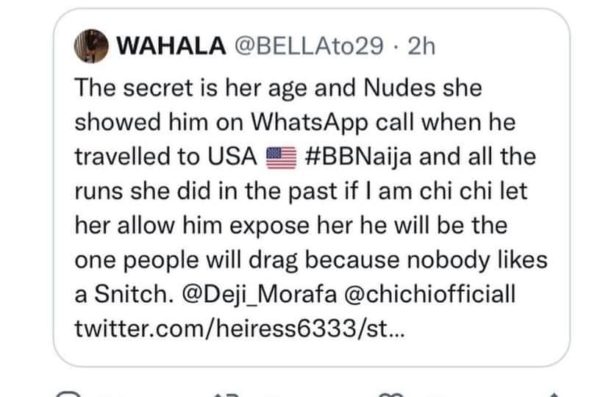 Reacting to the now-deleted tweet, Deji said the user was “delusional” and was spreading “lies”.

“You guys are delusional with all these lies,” he wrote.

You guys are delusional with all these lies https://t.co/eNwx9JwM4D

“I am seeing a lot of narratives invented by people who have nothing better to do with their lives,” he wrote in a follow-up post.

“Una go dey talk rubbish until den use police carry una for false narrative. Continue if you know say you no wan enjoy Christmas for house,” he added.

During their stint on the Big Brother Naija reality show, Deji and Chichi were romantically involved, with many believing that the relationship would continue after the show.

Okiemute: It’s not easy getting collaboration with big artistes, they think we’ll take their shine

‘He should be castrated’ – rape allegation against COZA pastor sparks outrage