Annie Idibia, the Nigerian actress, has laughed off a viral report that 2Baba, her husband, impregnated another woman.

The musician left tongues wagging recently when he put out a lengthy statement apologising to Annie for his “flaws as a husband and father”.

His post had raised brows, fueling speculations on social media that the singer had sired another child extramaritally.

But in a statement released by his team, 2Baba debunked the report, describing it as “totally false and malicious.”

“Reports of him getting anyone pregnant are totally false and malicious and we urge well-meaning media platforms and members of the public to completely disregard such. It is fake news,” he had said.

“Many would recall that this fictitious banker character has been repeatedly getting e-pregnant for @official2baba every two or three years since 2014. There is no iota of truth in this allegation.”

Annie also shared the same statement via her Instagram story while describing those behind such a report as “malicious humans”. 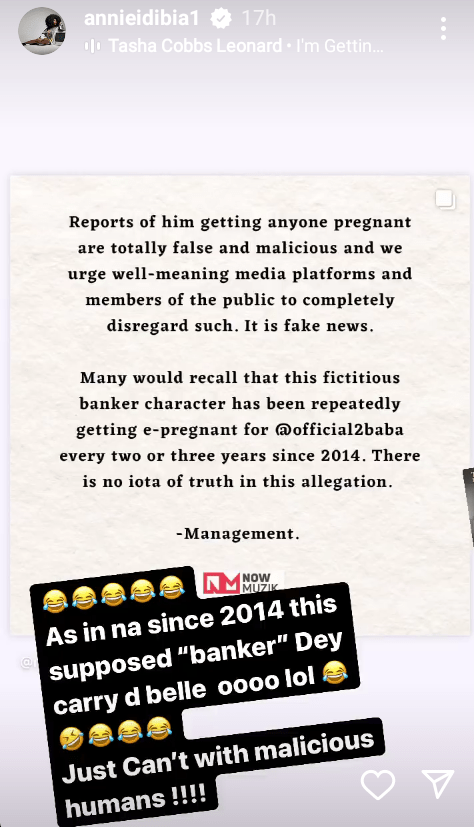 2Baba got married to Annie in May 2012. They both have two children, Olivia and Isabella Idibia.

In 2021, the pair were the subjects of a widely reported marital crisis that spanned a couple of months.

Ebenezer Obey: Why my mother didn’t believe I could succeed as musician