The sold-out event, which was dubbed the first ever Nigerian ‘bedroom musical concert’, held at the Muson Centre in Lagos, on September 1, 2019.

You know how dancers say they’ve found the right dance partner? It’s safe to say I’ve found mine. @floydweirdsurname is a natural and makes me feel like a pro #redvelvetconcert 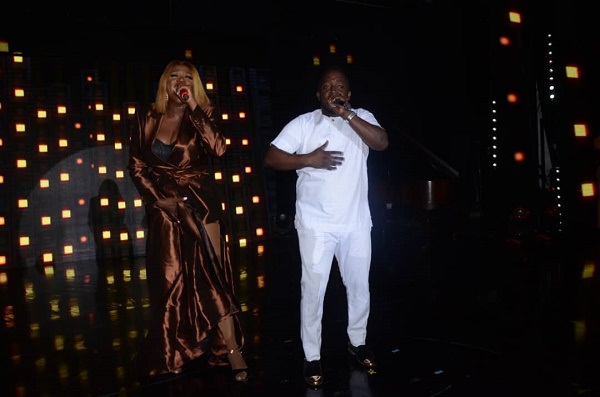 Speaking at the event, Waje said the ‘Red Velvet’ concert would mark a pivotal point in her music career that would see her kick-start her mission of bringing alternative music to the mainstream.

I am @johnnydrille mugu any day. This young man has come through for me many times and I can’t express my gratitude towards you. I’m so blessed to have met you in my lifetime and thank you for sharing the stage with me. 💗💗💗💗 I didn’t even know you’ll make it so it was a pleasant surprise. Performing #udue feat @johnnydrille @ the #redvelvetconcert

The much-acclaimed R&B vocalist also hinted that she would love to have the concert annually.

“I am so happy to do this. I would want to have this kind of event every year in order to bring alternative music to the mainstream,” she said.

At the concert, Waje’s scintillating voice and pronounced appearances spurred vivid moments of hysteria as the crowd screamed, sang along, and danced to her performances which was expected based on her ‘Red Velvet’ album released in 2018.

King GOLD! A professional, A star and performer. You sabi!!!!! Thank you My dearest brother @adekunlegold . When @fatimaomokwe told me you’ll make it, I screamed like a kid in a candy store cause you know I am a FAN. I am indebted 💗💗💗💗 Performing why feat @adekunlegold @ the #redvelvetconcert Video coming soon.

@adekunlegold : what are you even singing sef Me: I wanna tell you say I’m sorry but you know dey here oh why oh why oh why #redvelvetconcert

The tracks she performed include ‘Soldier’; ‘Be Mine’; and ‘Got Sauce. Also included is Waje’s duet with Adekunle Gold for ‘Why’, which got the audience on their feet.

This was followed by her performance of ‘One Naira’ featuring MI, Nigerian rapper.

What a lovely way to burn 🔥 ⚡️ 💡 #redvelvetconcert

Among the stage performances that also thrilled the fans are Kaline’s sultry session, which saw her showcases her musical dexterity; Chike’s teasing of his upcoming studio album, and Johnny Drille’s unrivaled song.

BBNaija’s Praise: Why I keep my love life private