‘I have evidence’ — Adebayor accuses Dillish Mathews, ex-girlfriend, of cheating

Emmanuel Adebayor, a Togolese football star, has accused Dillish Mathews, his former girlfriend, of cheating and lying during their time together.

In a series of posts on his Instagram story on Friday, Adebayor narrated several instances when he was being “manipulated and lied to” by his ex-lover.

The former Arsenal and Real Madrid star recalled Mathews once telling him she was going to Namibia on a weekend trip with a friend “only to discover that she actually went to Angola later”.

Adebayor said when quizzed, the 2013 Big Brother Africa winner had stated that she “doesn’t know how she got there”.

The ace footballer also recounted how Mathews introduced a man to him as his “rich uncle” when they visited the beach only to find out a few months later that she was “lying”.

The 36-year-old narrated how he sent money to the reality TV star to give her family but later discovered that she “shared it among her friends”.

He said it was unfortunate that in spite of the incidents, Mathews, who is from Namibia, has the audacity to accuse him of being stingy.

Using the hashtag #DillishDribbledAdebayor, the footballer said the development was a confirmation of his earlier reservations about marrying a “comedienne”.

He went on to dismiss claims that he was being “jealous and obsessed” with the reality TV star while urging her to steer clear of issues related to him. He also revealed that he has evidence to back his claims. 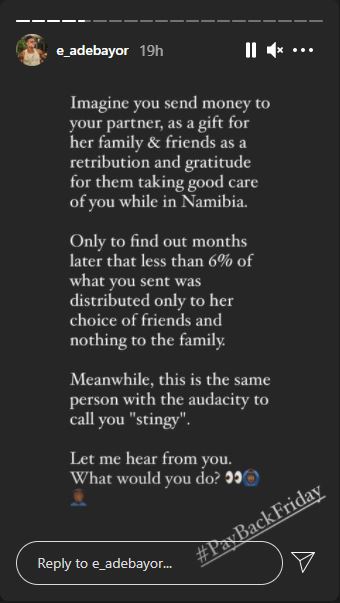 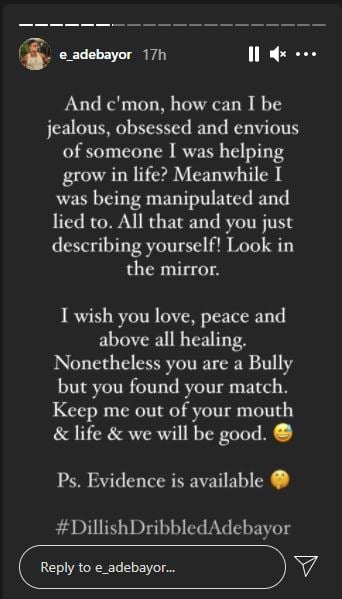 “…how can I be jealous, obsessed and envious of someone I was helping grow in life? Meanwhile, I was being manipulated and lied to. All that and you just describing yourself! Look in the mirror,” he wrote.

“I wish you love, peace and above all healing. Nonetheless, you are a bully but you found your match. Keep me out of your mouth and life and we will be good. PS. Evidence is available. #DillishDribbledAdebayor.”

Mathews, who has been very active on her Instagram story, is yet to speak on Adebayor’s claims.

Foluke Daramola: My husband’s support for Obi won’t affect my loyalty to Tinubu