According to NAN, Umar won the contest with her entry — ‘Rai da Cuta’ (life & sickness) — which examines how a family’s refusal to comply with COVID-19 guidelines resulted in a disastrous end.

Commenting on the development, Umar expressed her excitement at winning the writing competition. She also added that she had always loved to read books and write to inspire solutions to problems.

“I have always been someone who loves to solve problems. I enjoy finding solutions in innovative ways. Then, I found the internet – the easiest way to deliver my message. That’s how I began to write,” she said.

Surayya Yahaya, a 25-year-old from Kano, emerged second with her work titled ‘Numfashin Siyasata’ (my political life), while Rufaida Ibrahim, a 25-year-old student in the state, came third with her story, ‘Farar Kafa’ — which means the wife who brings bad luck. 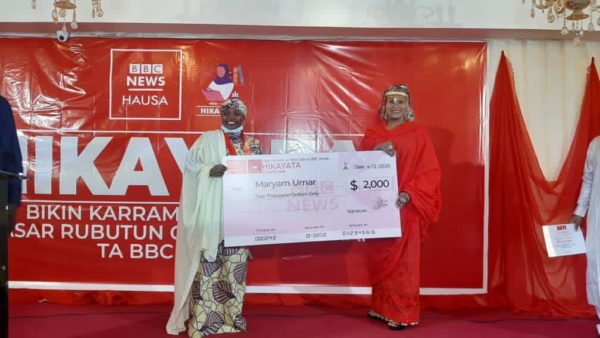 Marina Forsythe, the BBC World Service group communications publicist, explained that the contest, which began five years ago, was introduced to give female writers a platform to tell and share their stories.

She quoted Aliyu Tanko, editor of BBC Hausa Service, as saying: “I’m thrilled that this year’s awards were won by very young writers which show how our primary targets have embraced this competition.

“Many writers have been empowered by these awards over the past five years which is a testimony to how we value our young female audiences.”

Bilkisu Funtua, the lead judge, commended the quality of entries received, adding that “all the writers are winners.”

She added that it is important to provide female Hausa writers with the platform to tell their stories.

“This year’s winner highlights a story that everyone can relate to in these unprecedented times,” she said.

NYSC: Beware of scammers, no date fixed for Batch ‘B’ orientation