An actor’s actor is one who is revered and admired for their talent and dedication to the craft. Those who fall into this category give everything while on set; inspire, motivate and help enhance the skill-set of other actors around them.

Taiwo Ajai-Lycett, a veteran of the movie industry, is one of such persons.

After over half a century of churning out quality acting, Ajai-Lycett still has a never-waning, hardly wavering dedication, passion and commitment of a greenhorn.

On the concluding episode of TheCable Lifestyle’s The Legend Series, Ajai-Lycett speaks at length on how she strayed into acting, relocating to Nigeria at the height of her success in Europe and the US, her disciplined approach to acting and the inheritance she has for the young generation of actors.

How was it starting out when there was no sophisticated technology to push your craft?

How many years have you spent on stage, screen as an entertainer and a broadcaster?

What was the first gig you did?

My first gig, I think it was during the Biafra war, we were trying to raise money. I knew some actors and we did something with Commonwealth Institute. 51 years ago was when I worked at the Royal Court, London, for the premiere of Wole Soyinka’s ‘Lion and the Jewel’.

After you got signed by an agency, did it occur to you that acting was your path or were you still uncertain?

People kept saying I was good, then I started having fears, telling them that I am not an actor.

I had reservations that I wasn’t an actor. I thought to myself that if I didn’t do something about it, these people will find out that I am not an actor, so I started training. Nigerians are suckers for studies and training, at least my age group at that time.

You have to be an expert at what you do, so I decided I must go for acting training just meet my expectations and never let anybody down in what I am doing.

At what point did you fully embrace it and set every other thing aside?

It was my future husband. I had met him and fell in love with him. I was called to do a play at Edinburgh International Festival, it was a big deal. He flew all the way from London to see the show at opening night and it blew his mind. After the show, we went for dinner and he said he knew I was multi-dimensional and he asked that I leave my work and every other thing I was doing. He said he was absolutely certain that I was going to be a great actor. That was how I gave up and concentrated on being an actor.

So he played a role?

Yes, together with the people who kept telling me I was good.

At what point in the entertainment industry did you know you had become a star?

The word ‘star’ doesn’t feature in my thinking. I am an expert at what I do.

Okay, when did you become widely known for your work?

By the time I starred in my first show. By the time I did Edinburgh festival, Daily Times was sending people from Nigeria to interview me. I have been well known for a long time. 41 years ago when I came back home, I was a name. 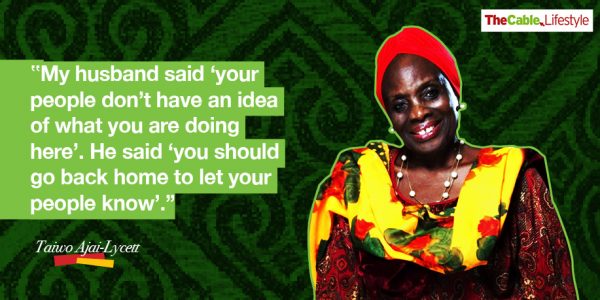 Why did you come back to Nigeria?

My husband played a role. I was making big waves in Europe and America. He said to me: ‘your people don’t have an idea of what you are doing here, he said you should go you should let your people know’. I was married to an incredible man… for 25 years. In 1971, the idea of coming back home was born. I came to rebuild, because I believe in the industry and how it should be structured.

Did you ever think of going back?

You can’t think of going back because things are not working for you. You work, you try and do something.

Why don’t we have productions that put the government on its toes?

Are you kidding me? You can’t do that if you don’t have the right support. I am against taking foreign funds to do something I am supposed to do here. It is my dream that people walk the talk. Because there is enough money here. Not all business people are rapt, not all of them are deaf or blind to what needs to be done. Why don’t they put the money there? It is not funding we lack, it is the mental, spiritual and intellectual will to do the right thing that we lack.

Why do you think there’s so much rot, corruption in the system?

It is a poverty syndrome that makes somebody put money in a suckaway(sewage disposal system), I mean how sick can you get? With that money, they can industrialise this country, they can build hospitals and still make money, but it will never occur to them that they can make money like that because all their concern is that they have it.

Most veterans tell me there’s a dip in quality of acting, and I see in them a sense of resignation. What can be done?

We must keep soldiering up. Years ago, I started actor’s studio, training actors that didn’t think they needed help in training. I am going on 77 now, why should I be worried about people messing around, I am on the way out, but I still am. So it’s not true that we are sitting around and not doing anything. It is the reason why I am here. I could have been in my home in England. People ask me why am I here. I am a widow, I don’t have a boyfriend, I don’t have a girlfriend, I don’t have anything.

What was the last Nigerian production you watched?

Well, it will be ‘Madam President’, I am in that one. I also watched ‘The Wedding Party’.

Considering everything you stand for, what will it take to get you on a movie set at this point in your career?

The reputation of the people I am working with is important, otherwise what is the point. Don’t forget we are not appearing in films just because we should be in films, but to make sure that what we bring out is going to be presentable. That’s the whole point of it. I would want to know the pedigree of people I am working with because the outcome of our project is hinged on that. We wouldn’t know whether it would come out as s good film or not. Even the best of producers and directors, they make bad movies. When I first came to Nigeria, we did a play at National Theater. I didn’t know the works of all the people I have worked with, but I did know Jimi Solanke because we were at an international festival together. We were the only two Africans there. He is the only person I can even say had some kind of education. 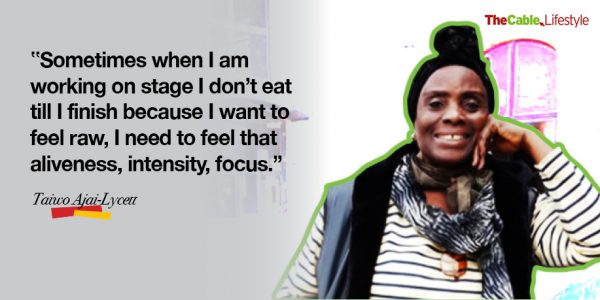 What is your preference between stage and screen?

Stage, because that is where you are most challenged. You have to be on your toes on stage. You really have to be wide awake on stage. There is not a situation of Take 1, Take 2, Take 3…NO! You either get it right or you are sunk. It means you have to know your story before you get it there. Sometimes when I am walking on stage I don’t eat till I finish because I want to feel raw, I need to feel that aliveness, intensity, focus. That every word I say, I know what I mean.

Do you think every actor needs to have stage experience?

I think so, I think it’s a natural transition. You know those actors in America; they would do anything to go to England to do a season. That is the value of mastering your craft. They will go on Broadway, off-Broadway; they will come to England, do series, just to hold their skill.

Are you ever going to retire?

What is there to retire from? I am mentoring, but I will keep acting, you know, they are mutually exclusive, one doesn’t disturb the other. As a matter of fact, when you are not acting, we say you are resting, but that resting means all the experiences you are collecting off stage, you are collecting experience off stage so that you can come back to give will affect you when you get back. It’s all about experience and feeding back the experience. You don’t retire. So if I am not working, every day I am doing my exercises — vocal and physical.

Where does that discipline come from?

From the training that I got. This is why training is important, because once you go through the training, it tells you there are steps to get to certain places. Therefore there is no shortcut. 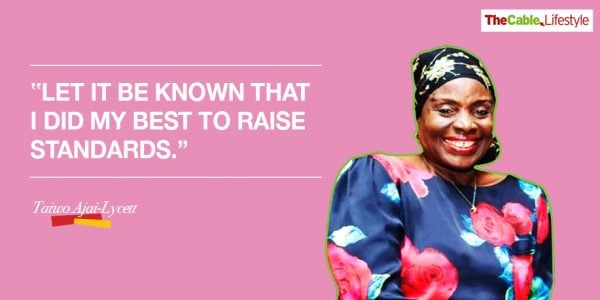 What do you want to be remembered for?

Let it be known that I did my best to raise standards. Taiwo Lycett Arts Academy, if people are ready let them come for one on one training in acting. I am obsessed with education. I am teaching the philosophy I want for life, and I can see them working.

SPOTLIGHT: Meet Rose May, David Alaba’s sister on a mission to win hearts