Some students of the University of Nigeria, Nsukka (UNN) have protested against the increase in the tuition by management of the institution.

Onwe said the protest was first held on Thursday night and was concluded on Friday morning.

“The protest was over school fees increment. We’re basically trying to raise awareness and we have already achieved the aim of our demonstration. We have met with members of the management and deliberation is on. Everything is calm now,” he said.

A student in the department of social science education at the institution also faulted the fee increment.

The student, who preferred anonymity, said: “the protest is over the increase in school fees. In my department, final year students paid N40,000 for the last session, now it’s N83,000”.

In now-viral video clips and photos from the demonstration, the rankled students were seen calling on the management to reverse the fee hike.

They carried placards with various inscriptions such as “I no be ritualist, I no be rich kid #JusticeForUNNStudents. I no dey pay shishi”.

When contacted, Okwun Omeaku, the institution’s spokesperson, said he was driving and would not be able to comment.

“I’m driving at the moment, I’m on the highway,” he said.

The development comes amid the ongoing face-off between the federal government and the Academic Staff Union of Universities (ASUU).

ASUU has been at loggerheads with the government over its decision to pay members half of their salaries after the union’s eight-month strike ended.

The federal government had insisted that the union members would not be paid for the period they were on strike, citing its ‘no work, no pay’ policy.

Members of the union had also threatened to adopt a ‘no pay, no work’ policy if the federal government insists on not paying the withheld salaries.

Below are photos from the protest: 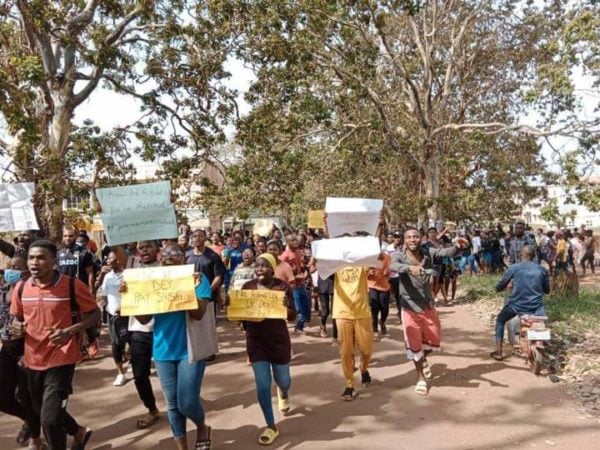 ATBU VC: 30 students were on bridge taking selfies before it collapsed

Ex-Babcock student president gives back to the community