Fans of Florence Otedola, Nigerian disc jockey better known as DJ Cuppy, have come to her defence on social media after a Twitter user’s response to comments she made concerning giveaways on social media.

The talented DJ took to her Twitter page on Monday to explain why she doesn’t do giveaways. She said it made her feel she was paying people to become fans.

“To all my cupcakes that complain I don’t do Money Giveaways, I hear you… BUT I’ve always felt like that was essentially paying people to be your fans? #TeamCuppy,” Florence wrote.

To all my Cupcakes that complain I don’t do Money Giveaways, I hear you… BUT I’ve always felt like that was essentially paying people to be your fans? 🤷🏽‍♀️ #TeamCuppy

Her tweet, however, prompted a response from Mazi, a Twitter user with the handle @mathewamad, who quipped that her giveaways will be used as compensation for the “trauma and emotional turmoil endured listening to her music”.

“No ma, it is compensation for the trauma and emotional turmoil we go through enduring your music. We still love you sha. Music or no music. You are adorable,” he wrote. 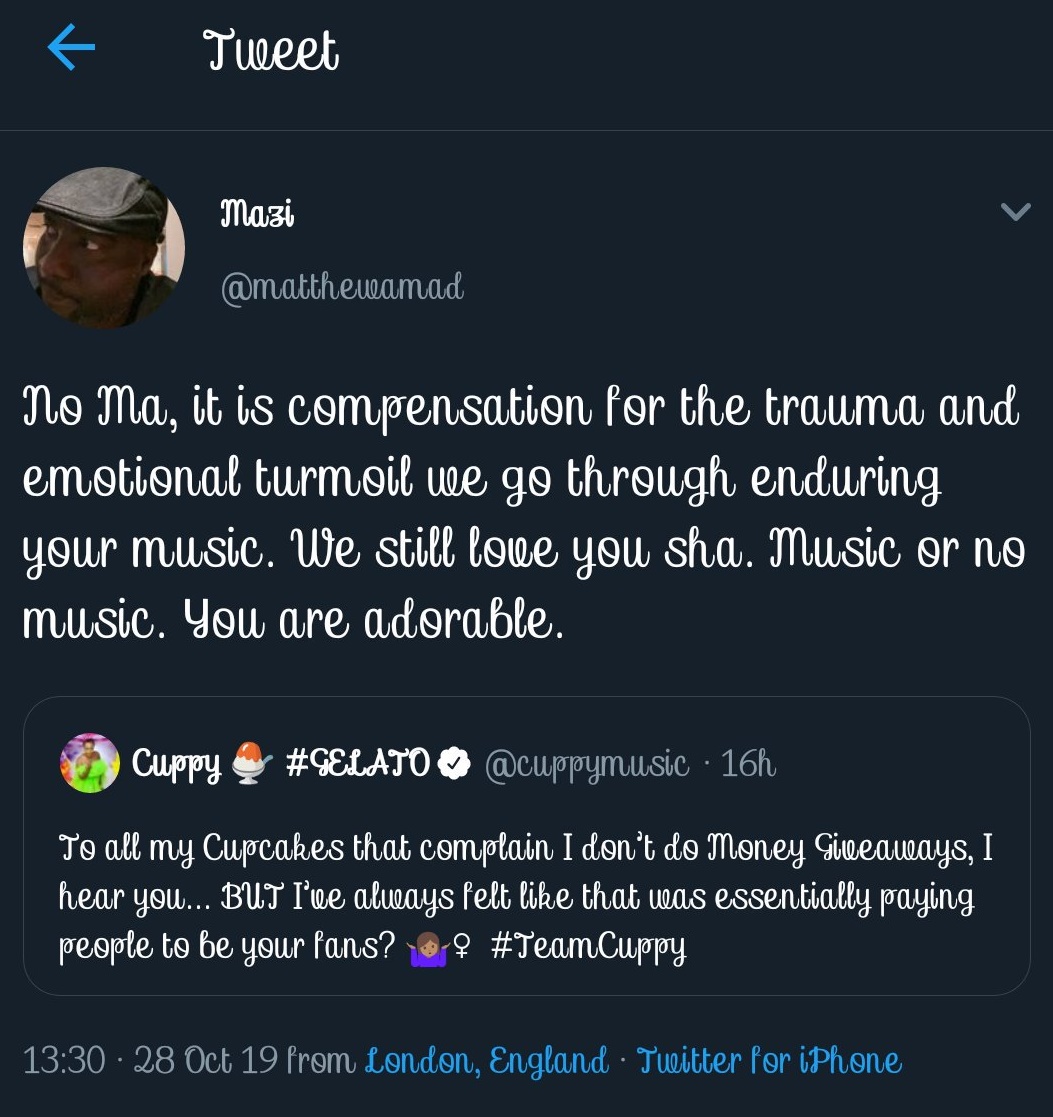 Mazi’s response did not go down well with fans of the talented DJ and they have since taken to the microblogging platform to express their annoyance, describing the response a “form of cyberbullying”.

“Stop hating on rich people, they are not the reason why you are broke. #FreeCuppy,” DreamChaser said.

“These Twitter bullies are just so funny so because Cuppy Haven’t done any giveaway, y’all are mad at her…does she hustle for any of us, No. So what’s the big deal and what’s giving y’all the guts to even throw insults on her… Don’t go and hustle for yourself #FreeCuppy,” a Twitter user said.

“The way Nigerians swallow bull***t and lick a** because of the small giveaway on the streets is really sad and disheartening. I’m super against cyberbullying, no matter the person involved,” another user said.

Stop hating on rich people, they are not the reason why you are broke. #FreeCuppy

These Twitter bullies are just so funny 🤦 so because Cuppy
Haven't done any giveaway, y'all are mad at her…does she hustle for any of us, No. So what's the big deal and what's giving y'all the guts to even throw insults on her… Don't goan hustle for yourself #FreeCuppy

The way Nigerians swallow bullshit and lick ass because of small giveaway on the streets, is really sad and disheartening. I'm super against cyber bullying, no matter the person involved.#FreeCuppy#Mazi

We love DJ cuppy,but you all have taken it too far😂😂 we have blasted Mazi enough already.. You all should channelthis energy to Valking…Nah him start this cuppy bad music thing #FreeCuppy

I never liked Mazi before, because apart from doing giveaways, what else make him trend? But cuppy, yes DJ cuppy has the money and yet decides to work and live an inspiring life, so Mazi should STFU and learn!

If all you have is money, you have nothing#FreeCuppy

Mazi has been buying loyalty on this street with his giveaways, no wonder he felt attacked by that innocent tweet from DJ Cuppy who doesn't even know if he ever existed.#FreeCuppy .

You know i'm still confused…..WTF DID DJ CUPPY ACTUALLY DO TO Y'ALL?? She was given birth to or what?? my people #FreeCuppy jor!

+234 Twitter were the ones dragging and cyber bullying Dj Cuppy
The same people are now supporting and defending her
What exactly is wrong with you guys? #FreeCuppy

Ever since DJ cuppy break down in tears on her IG live i have seen a great improvement in her against cyber bullies, dem go tire she is now immune to online savages #FreeCuppy

So because DJ Cuppy no dey do giveaway na im make some people carry her matter 4 head 😏. I thought we've passed this era of bullying her online. Abeg make una #FreeCuppy its not by force to share money to fans. How many giveaways Taylor swift, Ariana grande and Beyonce dey do?

#FreeCuppy!!!!!! Una no dey tire
Bitter souls …. yes her music makes our ears bleed in the past
Y’all gotta give her some credit …. her songs are getting waaay better than it use to🤦‍♂️ keep focusing on the wrong fucking thing 🙁
Una never tire to dey chop plastic rice??

It's obvious that most Nigerians just backlash DJ Cuppy because her father is rich and spoils her.

90% of the people out here shouting that she doesn't make good music find it difficult to eat twice a day.

May God help us! 😑#FreeCuppy

#FreeCuppy what mazi said about cuppy has always been said on this app without any hullabaloo. But with the size of is followership, it is easy for so many to misperceive his point. Is cuppy even a musician. Can she play her song as a DJ?

This whole Cuppy vs Mazi thing just turned Cuppy's music career on its head. People will begin to appreciate her now. Watch her be loved by Nigerians as we love Davido.
I've always always loved her music and vibe. Stay winning Cuppy. #FreeCuppy

Your favorite online doctor in the UK Funmilayo once said Yemi Alade should be tied with rope and flogged because he considered her song in the Beyonce's Album as a trash.

I called his insensitivity out&he blocked

Oga Santa claus She wasn’t talking about her music but learning how to do give away and not making it seem like she is buying her fans, that’s what’s she’s talking about, you’re wrong Baba #FreeCuppy and focus on your own giveaway she said she’s not doing… https://t.co/Yp6s3RQdUm

#FreeCuppy why are Nigerians always negative, I mean so much hate for DJ cuppy. Is she supposed to live her life to please you.

How can you say Cuppy makes terrible music? 🤦‍♀️
I agree on most things you said, but that terrible is a big fat lie.

Anyway it’s your opinion so you can also do well to shove it up your ass till it gets to your throat. #FreeCuppy https://t.co/dArX3L3CFp

The comments under that Mazi’s tweet is mind boggling , May we not be compelled to agree with what we don’t believe in cos our next meal depends on someone 🙏😔 #FreeCuppy

Toolz: People who falsely accuse others of sexual assault should face harsher penalties

Jailing Ghanaian actress over nude photo with son too harsh, says Cardi B