MC Galaxy has criticised Miracle Igbokwe, Big Brother Naija winner, for not appreciating those who supported him to win the reality TV show.

According to the singer, E-money, owner of Five Star Music, sent N1m to Miracle’s family to help him secure votes.

MC Galaxy said the pilot has failed to show appreciation since the show ended.

“In this life, there’s a reason people don’t like to help others,” the ‘Sekem’ singer said in a series of tweets which have now been deleted. 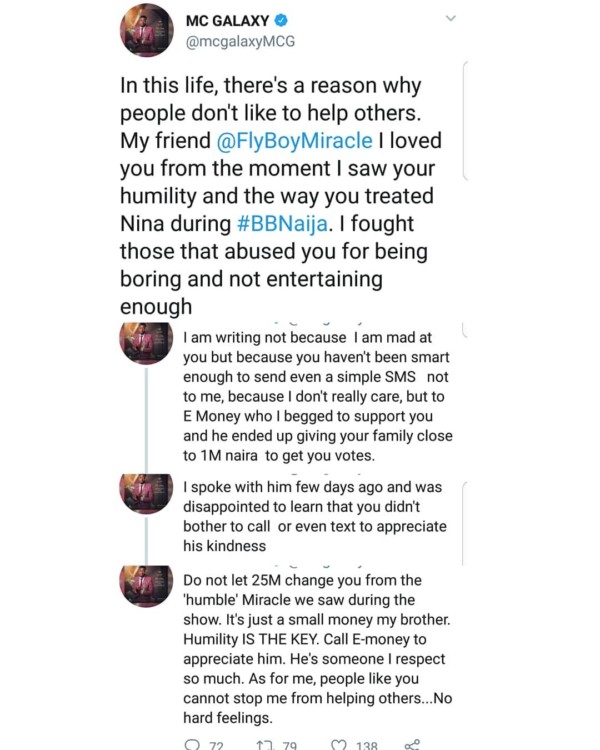 “My friend @FlyBoyMiracle I loved you from the moment I saw your humility and the way you treated Nina on BBNaija.

“I fought those that abused you for being boring and not entertaining enough.

“I am writing not because I am mad at you but because you haven’t been smart enough to send even a simple SMS.

“Not to me, because I don’t really care, but to E-money who I begged to support you and he ended up giving your family close to 1m naira to get you votes.

“I spoke with him a few days ago and was disappointed to learn that you didn’t bother to call or even text to appreciate his kindness.”

MC Galaxy went on to imply that Miracle’s meek persona on the show may have been a facade.

“Do not let N25m change you from the ‘humble’ Miracle we saw during the show,” he said.

“It’s just small money my brother. Humility is the key.”

“Call E-money to appreciate him. He’s someone I respect so much. As for me, people like you cannot stop me from helping others… no hard feelings.”

After emerging winner of the third season of the show, Miracle was appointed Imo state education ambassador.

Joeboy: I’m not encouraging alcoholism with my latest song