‘May they work against themselves’ — Nkechi Blessing hits back at TAMPAN

Nkechi Blessing, Nollywood actress, has lashed out after the Theatre Arts and Motion Pictures Practitioners Association of Nigeria (TAMPAN) vowed to work against her in the film industry.

TAMPAN had made the comment during its meeting on Saturday.

Blessing and Kehinde Adams were in May suspended by TAMPAN over their fight on social media.

The duo clashed over the arrest of Baba Ijesha, their colleague who is on trial for allegedly assaulting a minor.

Reacting to the fresh threat by TAMPAN, Blessing took to her Instagram Stories to say nothing would stop her from airing her views.

“For as many that have vowed to work against me, may they work against themselves and their entire generation unborn only I have ever wished evil on anyone!” she wrote. 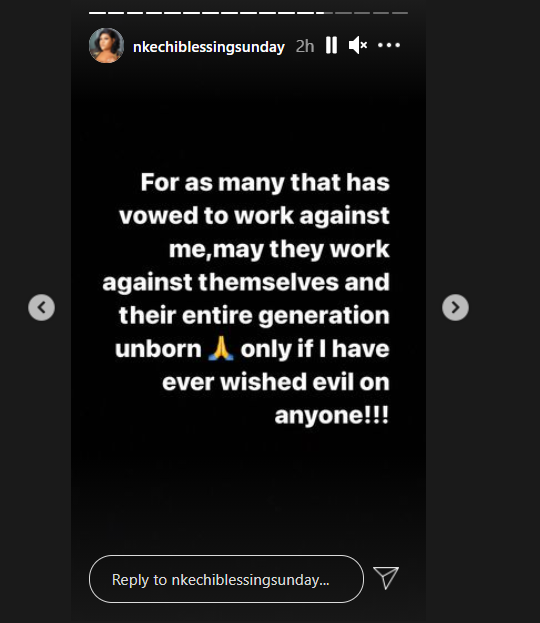 TAMPAN had also blacklisted Iyabo Ojo and instructed directors under its guild to desist from engaging her services.

The sanction of Ojo was also because of social media spats involving her and other colleagues in the industry, including Yomi Fabiyi.

Ojo subsequently responded by saying she cannot be silenced when it comes to the issue of child molestation in Nigeria.