The Legend Series: People call me a snob but I’m not… I’m shy and down to earth, says Onyeka Onwenu

Not everyone gets to see their creative creations remain relevant for decades, and possibly outlive them but Onyeka Onwenu does not belong to the category of ‘everyone’.

She’s among the select few, the world over, who can boast of having evergreen songs. Many years after its release, ‘Iyogogo’ will still get people on their feet, dancing, anywhere it is played.

The song is so prominent that disbanded Psquare sampled it on its 2016 hit song ‘Bank Alert’.

As a result of her no-nonsense demeanour, ‘I don’t suffer fools gladly’ persona, the actress, singer, journalist and former public official is deemed a snub. But while Onwenu insists that the label is a misperception of her personality, she admits that she can be a diva when the need arises.

On this episode of TheCable Lifestyle’s The Legend Series, Onwenu talks about her foray into music and acting, present-day lyrical content and videos, as well as fighting for respect in a chauvinistic industry.

After spending decades in the industry, what changes and innovations do you appreciate the most — and have had the most impact on your craft?

It has to be the digital advancement and other technical improvements and renovations available in the studio, such as voice corrections. But then one has to be careful with these because the analog system has its merits. The sound is richer and more authentic to the ear. We get around this by using both systems.

Also, the fact that you do not need to be signed to a record company for your music to be heard is a good thing for up and coming artistes who probably would not have had the opportunity they now have to simply reach their fans through the internet. 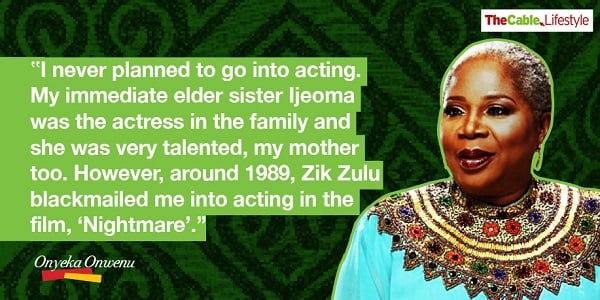 How did you get your first break into music, then later, acting?

While still in the United States in 1978 or thereabouts, I happened to speak on the phone with Sunny Okosuns. His first wife Nkechi was the sister of my first cousin’s wife, Ada Dan-Chimah and Sunny had called their house in Chicago where I was spending my summer holidays. I told him I was interested in having a professional music career. He asked me to send him a demo tape, which I did and which he liked. When I got back to Nigeria in 1980, I contacted him again and he took me to EMI. I was signed on and Sunny Okosuns produced my first album, ‘Endless Life’.

I never planned to go into acting. My immediate elder sister Ijeoma was the Actress in the family and she was very talented, my mother too. However, around 1989, Zik Zulu blackmailed me into acting in the film, ‘Nightmare’. The story was about a childless woman who found an abandoned baby and raised her. He promised that the proceeds would go to an orphanage. He had faith that I could act. The film was well received and my acting career took off from there. 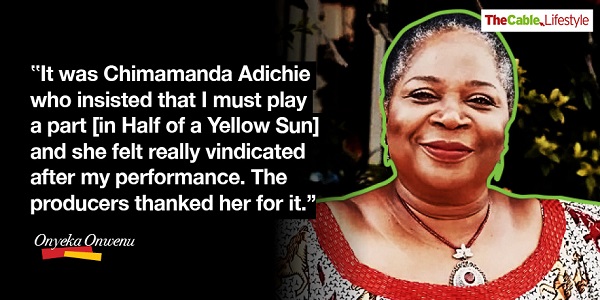 Your role in the adaptation of Chimamanda Adichie’s ‘Half of a Yellow Sun’ earned you wide praise. How was that experience?

It was very special on a number of levels; It was Chimamanda herself who insisted that I must play the part and she felt really vindicated after my performance. The producers thanked her for it.

The experience of working with Hollywood greats like Chiwetel Ejiofor, Thandi Newton, Annika Rose provided me with a great opportunity to learn a thing or two. To have received the reviews I did, in the midst of them, was something to be proud of. It was God’s grace.

I am also very proud that one of us John Boyega who was later cast in a Star Wars film is now the toast of Hollywood. I am hoping that opportunities like that will also come for me, from my appearance in Half of A Yellow Sun. It was a pity that for some political reasons, efforts were made to kill the film in Nigeria.

Finally, for the first time in Nigeria, Biafra could be depicted in a film. It gave us the opportunity to discuss our history. This is something that is needed, even if it still makes us uncomfortable, discuss it we must, so that we do not continue to make the same mistakes.

You have managed to keep your personal life vis-a-vis your children from the media glare. How’s that been possible and is that, in your opinion, the way to go?

I am a shy and private person. Because I insist on living a down to earth life, going to the market, doing the school run and going to places with my children when they were younger, I knew that I had to play down the celebrity lifestyle to a minimum. I am a diva on stage or in any situation that calls for it, otherwise, I am just an ordinary person. That simplifies my life and protects my family from unnecessary scrutiny and unwanted attention. My children are not keen on capitalising on their mother’s name. They are intent on making their own. I respect them for that. 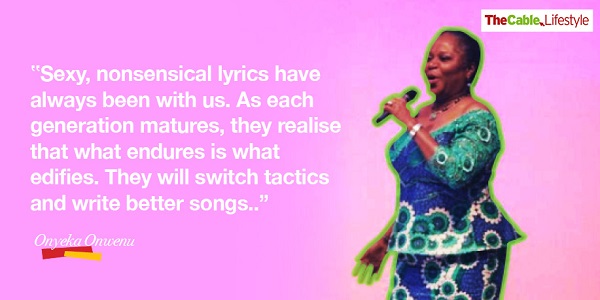 A lot of veterans have issues with present-day lyrical content and shoddy live performances — what’s your take on this?

I grew up in Port Harcourt in the ’50s and early ’60s, before the Nigeria/Biafra war. Those were the days of Rex Lawson, Osita Osadebe Celestine Ukwu, etc. Their songs were philosophical. But they also had lyrics castigating women and calling them Ashawo, ‘One Pound no balance’ and so on. That made me promise myself that I would sing songs that would uplift women. My point is that sexy, nonsensical lyrics have always been with us. As each generation matures, they realise that what endures is what edifies. They will switch tactics and write better songs.

I am more worried though about their videos. They are becoming more sexually explicit by the day and the children are watching. In fact, they are being influenced by the lewd dances they see in these videos, and their parents seem unconcerned. Mark my words, sooner than later, these children will begin to enact these sexual moves in real life.

I was at a children’s party recently and I nearly cried at what I was witnessing. Many parents were around and didn’t care. But when I took over the microphone and began singing my songs, Iyogogo, Ekwe, You and I, Bia Nulu, Alleluya, etc, the dance steps changed. The children enjoyed dancing and synchronised their steps but no lewd movements.

What was it like starting a career in entertainment at a time when there was no technological disruption or internet boom?

It was very interesting. We knew no better, so we took it all in our stride. For example, with the analog system of recording we were using in the early 80s, you had to record with your band, all playing and singing at the same time. If one person made a noticeable mistake, you had to start all over again. It was quite frustrating at times. Also, there was a noticeable drop in the technical quality of music recorded locally, compared to what was obtainable abroad. Mixing was also challenging. You had to cut, slice and join tapes, which was not always neat. The engineer also needed to be hands-on and remember the manipulation of the panel, as programmed in his head.

Many Artistes would compensate by starting their recording in Nigeria, but finishing in London. Still, the technical problems persisted. In 1984, however, when I recorded the album ‘In The Morning Light’, which contained songs like Ekwe, Bia Nulu and Alleluya, I decided to scrap the initial recording I had done in Nigeria because the technical quality was suspect and start all over again, from scratch, in London. We went partly digital, using the FairLight system. It turned out to be the first album in Nigeria with a digital component. The difference, of course, was remarkable.

The release and promotion of an album after release also were challenging. You had to work with a recording company and physically take your music to the radio and TV stations and of course the print media. There was no YouTube or iTunes so distribution was laborious and fraught with exposure to piracy. 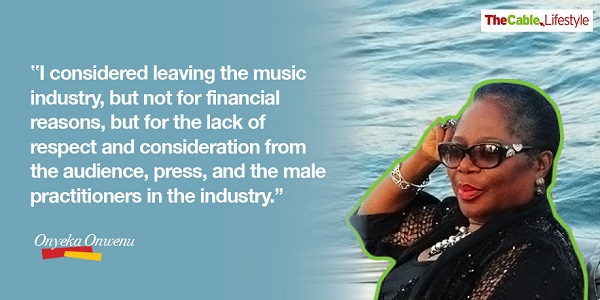 Did you ever consider taking a hike when the entertainment industry wasn’t as financially profitable as present day?

Yes, I considered leaving the music industry, but not for financial reasons, but for the lack of respect and consideration from the audience, the press, as well as the male practitioners in the industry.

Sometimes, people feel that you are public property just because you are a woman and an entertainer. They feel that they are entitled to talk to you anyhow, touch you, use your services and not pay you. I had to devise ways to protect myself. My policy is to only mix with people on a professional basis. I am very formal. I do not joke around and I do not socialise. I also collect all my fees before the show. By the same token, I conduct myself in a professional and self-respecting manner. I leave no room for failure to live up to expectations. In fact, I strive to exceed expectations in my performances.

I must say, however, that this has led to some people labelling me a snub. But I am not. I am indeed shy and very down to earth. I am also confident and self-assured.

What projects are you involved in other than entertainment?

When the music industry took a nose dive in the ’80 and ’90s, when record companies such as Polygram, EMI and Sony left the country, artistes like me picked up the gauntlet and continued to sustain the industry by financing releasing and promoting our music, under individual labels. Mine was called Ayollo Productions. We owned and rented out a rehearsal studio, musical equipment and the Kabassa Band.

I also set up and Events Center in GRA Ikeja called The Unity Center. As a member of PMAN and PMRS, I contributed my bit to sanitising and regulating the music industry, with regards to issues such as piracy, intellectual property and copyright dues. PMRS metamorphosed into COSON, one of the two collecting society in Nigeria today.

Meghan Markle to launch fashion line — for every piece sold, another goes to charity