Lekan Babalola is finding his way back home again. Home is Lagos – the city of dreamers and the restless.

It was in Lagos that a young Babalola first discovered the drum at his father’s Aladura church. It was also in Lagos that he first tasted and endured the scathing tongue of bullies.

In the 1980s, Babalola left Nigeria for England, paying N385 for his flight. He had no idea where he was heading or what he wanted to do with his life.

He was led by the fear of being powerless and bullied again, the ambition to be better than he was, and a sense of adventure to discover the world. 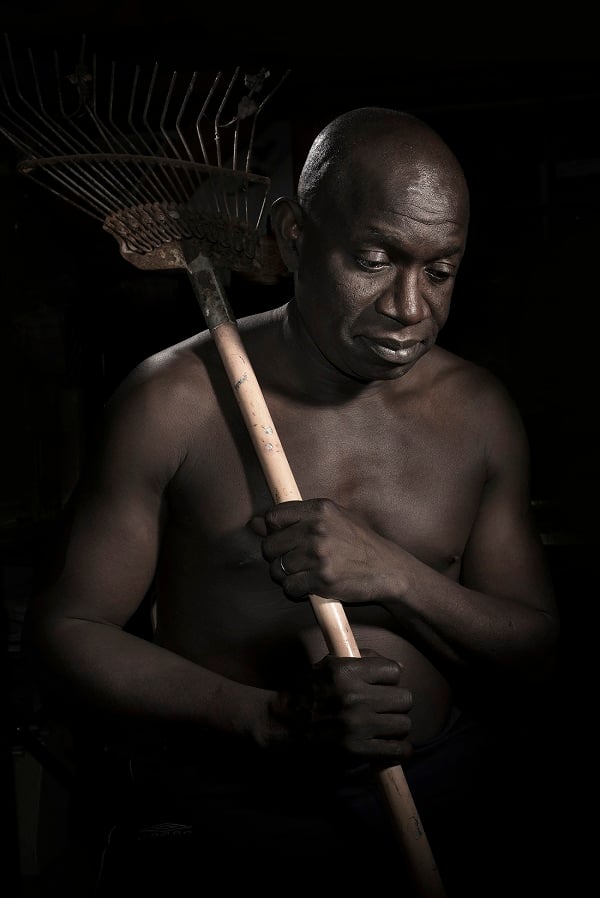 “I don’t want to return to the space I was when I was young in Nigeria. I don’t want to be in a situation where I will be bullied because when I was here as a young boy, it was not good. If the Yoruba people abuse you or make fun of you, if you are not strong you can commit suicide,” says Babalola in a soft, almost solemn voice.

Growing up in Lagos, Babalola was bullied, mostly for the way he looked. He was called ‘eja dudu(black fish)’ and taunted for his very dark complexion. In fact, he recalls a girl telling him that “she felt sorry for God” for creating him. Although Babalola is now able to tell the stories with laughter and levity, the words once cut deep and had a “mental effect” on him as a boy.

“I said to myself ‘I will do something.’ Which I didn’t know what it would be. But I didn’t want to be in a situation whereby I am going to be treated like crap again in my life,” says Babalola, noting that despite the difficulties he faced as a child, “I didn’t hate myself”.

Without a roadmap for his life, Babalola left the shores of Nigeria. Months later, in England, he took a huge gamble and dropped out of an aeronautical engineering programme and enrolled in an art school. “I was scared like hell,” said Babalola, who can trace his ancestry to the 10th century.

“When I was going to the art college, I wrote to the royal family that from the background of who I am that I think it would be uncivilised for the royal family to let me be stranded here. They got the letter. And they end up paying for my school fees. The Queen did.” 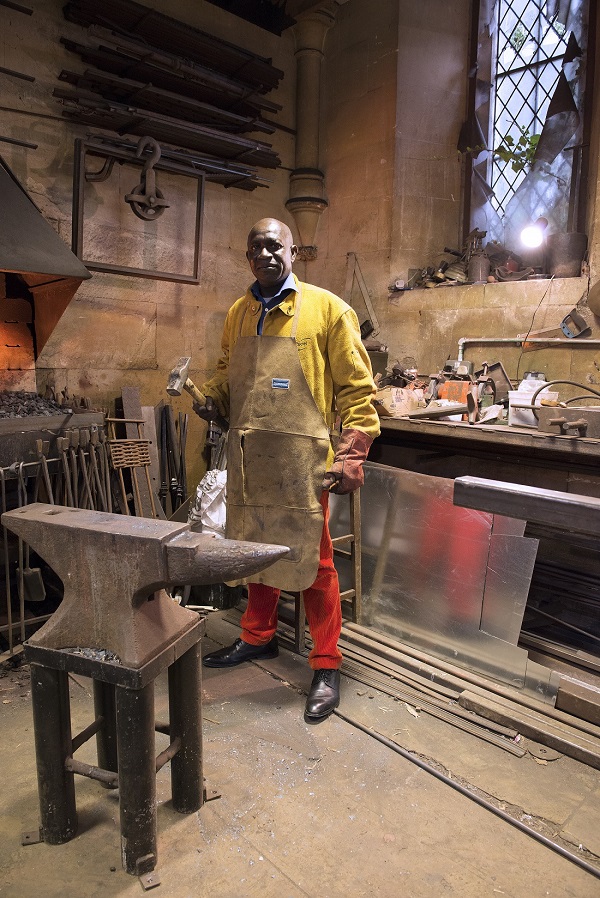 ‘Do not judge’ the Ifa priest

Prior to meeting him that Friday, I had only heard of Lekan Babalola a week earlier – despite his Grammy wins and groundbreaking collaborations. Now, I am standing outside the Temple Management Company (TMC) office, Victoria Island, Lagos, watching two camera crew members fuss over him while he sweats profusely.

“The sweat, man!” says Babalola, repeating the phrase again as he fans himself with a handkerchief.

“It was -7 degrees last week in England,” he says, adjusting himself on the chair.

Soon the camera starts rolling, Babalola looks a little awkward and uncomfortable. He botches his lines a few times and it had to be retaken. “I’m sorry. I’m sweating. I’m spoiling your show, man,” the veteran percussionist apologies.

The video interview kicks off properly and would later be moved indoors, saving Babalola from Lagos’ unyielding heat. After the interview ends, he asks for water before knocking around some balls on a pool table nearby.

Our discussion began shortly – interrupted only by a TMC office assistant who brings a tray of tea (despite the sunny outdoors) for Babalola and the movement of publicists, checking in occasionally on our conversation.

Babalola is affable. He speaks extensively on different issues, often times leaning over to slap my palms while laughing at his own joke or comment. He flirts with different cultures and religions. One minute he quotes from the Christian scripture, the next he references a Buddhist teaching or an Osun script or a religious rite on the streets of Japan. When he talks about the Prophet Mohammed, he quickly adds “salah ali wasallam. Peace be upon the brother”.

Babalola is an ordained Ifa priest. Although he was raised in the Christian faith, he has come to understand the universality of faith, worship and religiosity. To underscore his devotion, the percussionist released a whole album honouring the Yoruba god.

“I have been privileged to be accepted into the guild of higher learning of scholars who are Babalawo,” he says and goes forward to explain that “Ifa is the custodian of literature and embodiment of the symbol of civilisation and knowledge of the Yoruba people.”

He mocks critics of traditional worshippers. He sneers at the absurdity of anyone considering Ifa worship abhorrent or evil.

“And the scripture says ‘don’t judge so you will not be judged.’”

He leans forward from his chair, picks up his cup of tea, stirs it for a few seconds, and soon, something comes up for him to say. He drops the tea back on the tray without drinking any.

He would sometimes get so excited when he talks that his voice would rise a notch higher, he would speak faster than usual and quote from the Oriki and Ifa scriptures in Yoruba. Sometimes, he will catch himself and offer a translation, other times he’ll continue, his words meandering through cultures, societies, religions and countries. 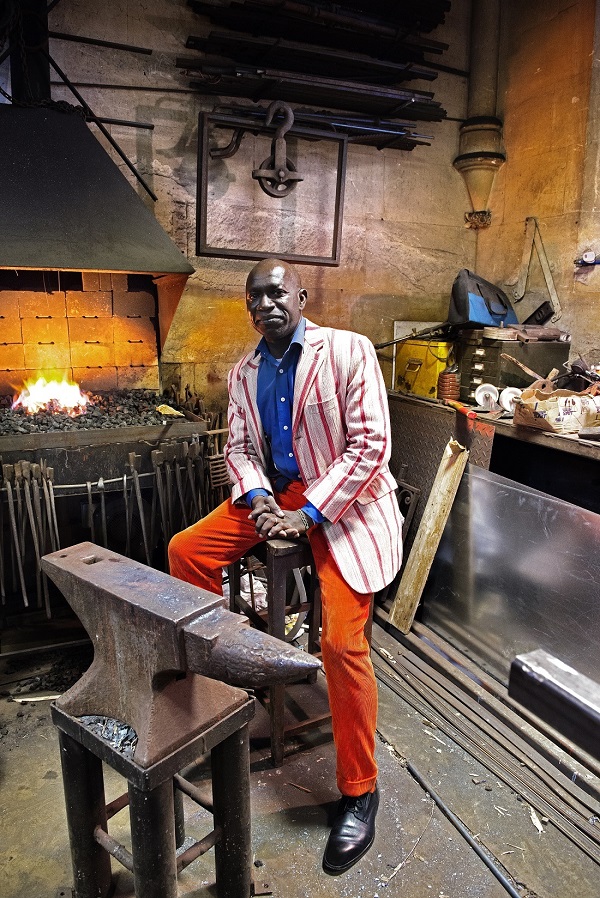 The ‘first chance’ and working with Prince

Babalola, 56, and married with a family in the UK, is confident in his space now. He is aware of his worth, beyond the reach of existential questioning and bullies. Over the years, Babalola had won two Grammy awards, knocked up a slew of international collaborations – including working with music greats like Prince, Tony Allen, and Ali Farka Touré (with whom he won his first Grammy).

“I am not Femi Kuti or Seun Kuti. My father is not known by anybody. I think the whole thing was that the creator had a master plan and I saw the opportunity – that it will not repeat itself again, after that first time and only chance,” says Babalola.

This first chance Babalola speaks of was when he got a call from Nick Gold, the famed producer for Buena Vista Social Club. Babalola, who lived about three hours away from the scheduled venue, was called to arrive at the venue by 10pm. That night, Babalola borrowed 30 pounds and hopped on a train to chase a dream he hadn’t actually dreamt of.

Of all his musical collaborations, his work with Prince is one of the most memorable. Babalola was in Nigeria with his family on holiday, staying at Parkview Estate Ikoyi, Lagos, when he got a call from the late American musician to come and work with him on his ‘Welcome to America’ tour in New York.

“I have never met a musician like that in my life and I don’t know if I will again. And I pray maybe. Maybe we only experience this kind of thing once in a lifetime,” Babalola says, pausing for effect. “Working with Prince changed me.”

Prince, Babalola says, was “a musician’s musician. Right? He was a musician for the public and he was our musician that we can learn from.”

“Prince said to me one day when we were on the road: ‘erm, it’s difficult for black people in the western hemisphere and the only place that black man, black women, have a chance to stand up and be tall is in Africa.’ So when you hear our mutiny in our music, Hugh Masekela you hear the blues, we have to let it out somewhere, our frustration.” 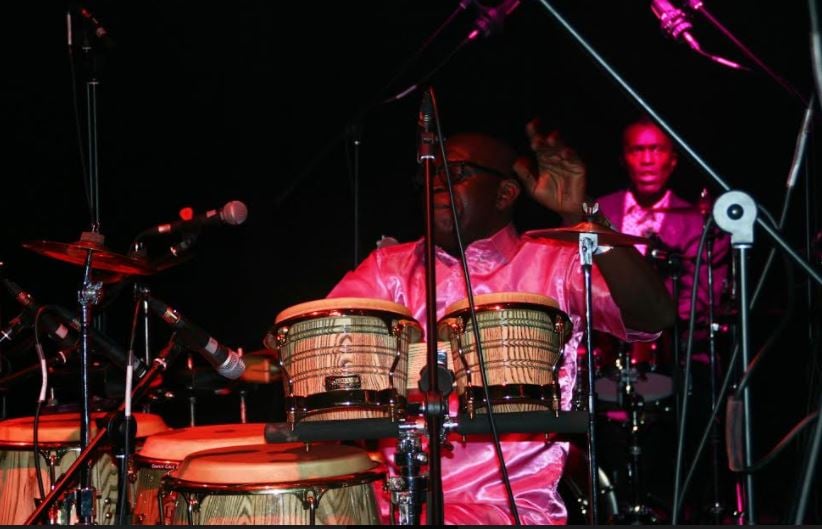 Afro-pop and the fault in Fela’s ideology

Babalola’s management is working to create an awareness about him in the local market by brokering music collaborations and media tours.

He is excited and eager to become a part of Nigeria’s growing Afro-pop culture. “I love the groove mehn! My house, my children… That’s what the whole world is listening to.”

“What I find limiting at the moment is that everything is drum machine sound. It is not human playing. And I want to be able to bring my musicians, fellow musicians, into the Afro-pop world. I think it would be a great collaboration because we are musicians and they too are artistes who have used technology to the best advantage. So I think with a combination of both, we will create something magnificent.”

Afro-pop, Babalola argues, is crashing down gates of socioeconomic class and struggles. Wizkid’s Ojuelegba, for instance, is an expression of class struggle and identity. But of this generation of new acts, Olamide Adedeji, Babalola says, is “breaking that gate” of class down.

Babalola says change in Nigeria would come without force or bloodshed. He is conscious not to sound like an idealist or a revolutionist. “I am not speaking as Fela. I am not a freedom fighter. I am a realist,” he says.

Although Babalola worked closely with the late musician, he still finds practical faults with the ideology and pronouncements of Fela Kuti. Babalola points out that Fela “should have practiced it by letting all those people living in Kalakuta to just produce bread. Just bread or chin chin. But he didn’t produce even condom. And is that how African industrialism will come out by? It’s in his song – Buy Africa. Yes, let’s start practising it in Kalakuta.”

Babalola says Fela “had the advantage. He had about a thousand people going in and out every year. We could have been making clothes, makeups.”

Despite Fela’s pronouncements against the West and his propagation of pan-Africanism, Babalola notes that Fela made them look to Europe and America for gigs. “Fela didn’t tour Africa. Fela only played in two African countries throughout his career. Ghana and somewhere else. But Fela liked to play in France, Europe and America.”

Charity, Babalola says, begins at home. Nigeria must learn to “turn our natural talent into foreign exchange” and learn from our past mistakes. “We can’t put the blame on white man. We need to produce. Because if we don’t, it will be one thousand naira to one pound.” 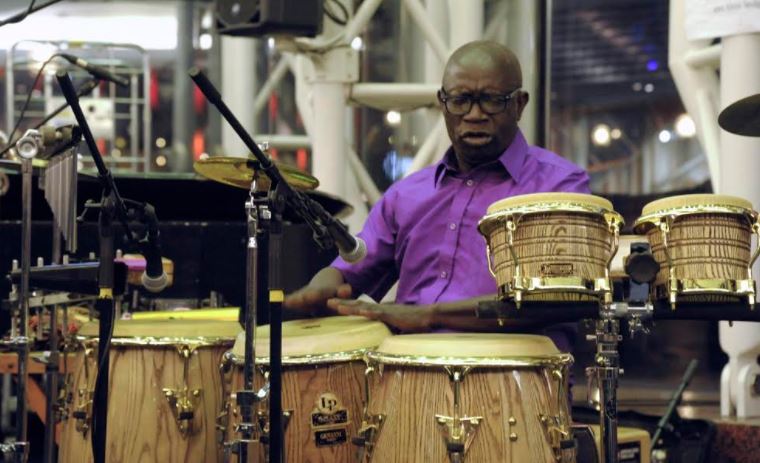 His tea still sits on the tray, untouched, cold. He reaches for it again, stirs it again and, like before, drops the cup to talk.

Babalola’s voice assumes a lower register here. He takes his time before saying each word. “The Yoruba people they will say: ‘Prayer is the rod for victory.’ Prayer is the rod for victory. You don’t need to go to church or mosque. I think believing in yourself is the most difficult thing, you know. And up till today I still don’t have confidence because there’s nothing secure. The only thing that is secure is death.”

But Babalola has fought his battles, won a few and is home now.

Glastonbury Festival cancelled due to coronavirus

VIDEO: A taste of what to expect from Olamide’s sixth album