Kiddwaya: Why I am yet to be married

In a social media post on Tuesday, the reality star, who is from Benue state, said during a conversation with Susan Waya, his mother, she had told him that it was time for him to settle down.

In his response, Kiddwaya said he told her that he will consider marriage when he gets rich as his father.

“My mum says its time to settle down. I told her I’m not rich like my dad yet”, he wrote. 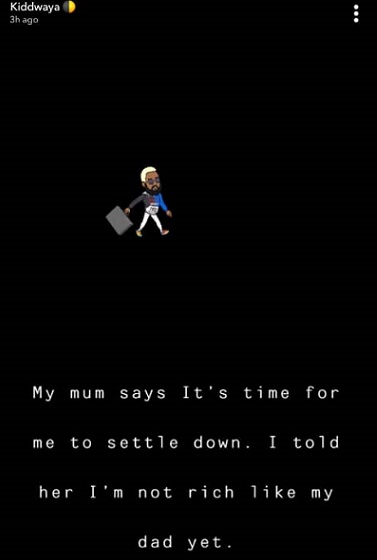 Kiddwaya was one of the contestants of the 2020 BBNaija season. During his stint in the reality show, he was a fan favorite, thereby making him a household name.

His relationship with Erica Nlewedim was among the most talked-about conversations at the ‘Lockdown’ edition of the show.

But their romantic relationship crashed shortly after the show ended.

Kiddwaya is the son of Terry Waya, the Nigerian billionaire businessman.

He is the CEO of Valley Agricultural And Foods Company. He is also the co-founder of AK Exports.

Kiddwaya is currently an ambassador for brands such as Ciroc, Eko Hotel and Suites, and W Dubai Palms.

ID Cabasa: Police officer slapped me and started begging after

You’re nothing without the media, Yomi Casual tells modern-day celebrities

Tiwa Savage: I don’t think men and women are equal… that’s not how God created us