Isbae U shocked over Mr Macaroni’s engagement to his ‘girlfriend’

Adebayo Ridwan, the Instagram sensation better known as Isbae U, has reacted to the engagement of Mr Macaroni to ‘Mummy Wa’, who is believed to be his girlfriend.

The trio are skit makers.

In the early hours of Saturday, Mr Macaroni took to his social media pages to reveal details of his engagement.

The entertainer shared photos with his supposed bride alongside a caption that indicates he is having his introduction on Saturday, April 23, while the wedding is slated for tomorrow, Sunday, April 24.

While it remains to be seen if the comedian is serious about the wedding or if it is one of his numerous skits, several celebrities have been congratulating him.

Joining the fray, Isbae U registered his shock at the news in the comment section of the engagement post.

He added that he was earlier “warned”.

“Wow, and they warned me ooo. Tor Alhamdullilahi,” he wrote. 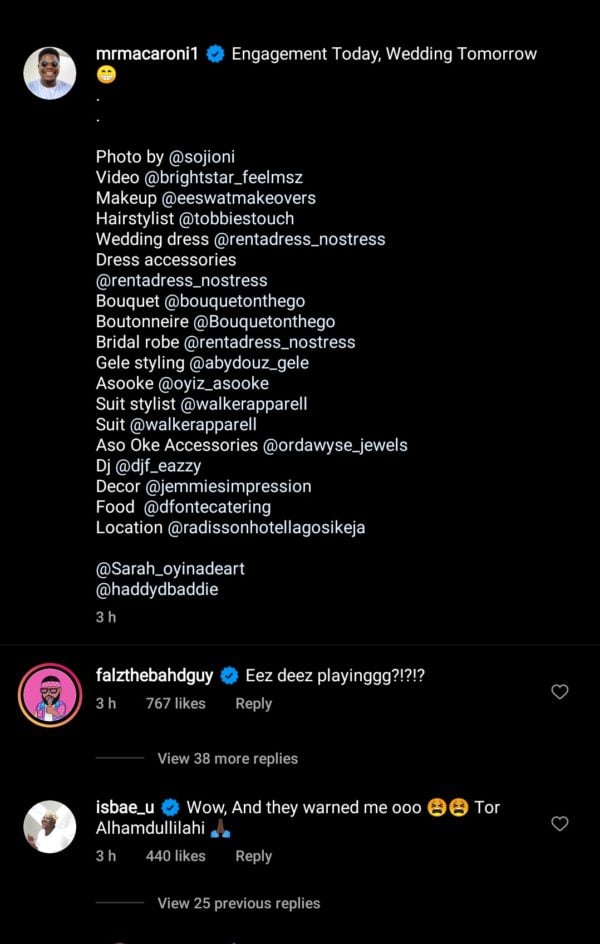 Isbae U and Mr Macaroni have featured in several skits together alongside ‘Mummy Wa’, whose real name is Kemi Ikuseedun.

Mr Macaroni’s engagement comes a few weeks after he said thoughts of marriage usually scare him.

In March, the skit maker said he has no plan of getting married soon.

He also said he has not been in a romantic relationship since 2012 when he was at the Houdegbe North American University in Benin Republic (HNAUB).

Here are what some Nigerians had to say on Twitter.

I thought mummy wa is dating Isbae U

Please someone should explain to me how isbae u and mummy wa were still dating as at march and by April, she's getting married to daddy wa…I've just checked soji oni's IG page. He has the official pictures…tell me it's a skit #mummywa pic.twitter.com/T3ek5g1MKf

Who is the person that told me that Kemz was IsbaeU's babe?🙄🙄🙄🙄

Me to Bae u Immediately i saw Mummy wa and Mr Macaroni pre-wedding shot 😂 pic.twitter.com/ynllSCUZ4Y

Chris Brown opens up: I still love Rihanna — but we hit each other a lot