INTERVIEW: Seasoned comedians losing out by not working with youngsters, says Funky Mallam

Missing the warmth and comfort of his home for months while grinding on set for a forthcoming project, Funky Mallam emerged seemingly tired, with puffy eyes, although he didn’t show any sign of fatigue in his responses. He would field answers to questions thrown at him, grinning every now and then, in a manner that filled the gaps where speech didn’t seem to have done justice.

In this interview with TheCable Lifestyle, the comedian, whose real name is Saeed Mohammed, opened up on his failed marriage, what he has in common with Don Jazzy, and how he survived the trying times of the pandemic. He also talked about how seasoned comedians are supposed to be spearheading the revolution in the comedy scene by rebranding and working with young comedians.

He also delved into the topical issue of insecurity that continues to ravage several parts of the country, especially the north.

As an actor, you have appeared in many movies. Which one do you consider your favourite?

The movie I consider my favourite happens to be ‘Eagle Wings’. I consider it my favourite movie because it talks about love, friendship, tolerance. And then, it shows the effort the Nigerian airforce, or let me say Nigerian forces, have been putting into combating crimes and insurgency in Nigeria, which a lot of people are not seeing from that dimension.

What do you think of the influence the new media has had on the entertainment industry?

Things are now easier. You can come from nowhere, if you are talented in one thing or the other and just open an account on Facebook or Instagram and start doing your thing, people will start recognising you without going to any media house or anything like that.

Before you know it, you start reaching a wider audience, and all of a sudden, you see that someone is having one million followers, and the person becomes popular in his own bedroom, without going anywhere, so it is a media revolution that we are witnessing now, which actually has paved way for a lot of young talents to be able to participate in the competitive field without any media sweat. 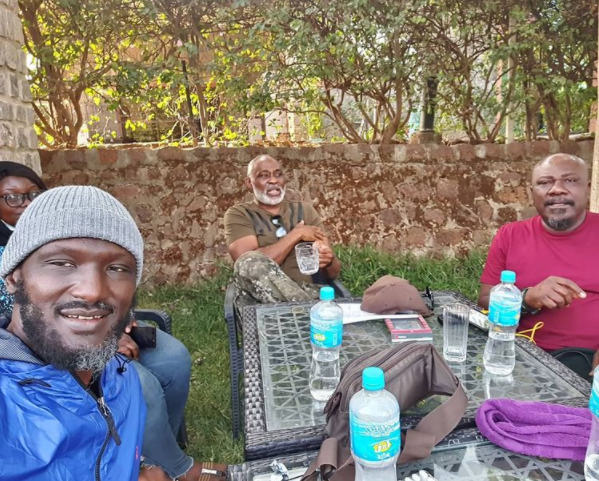 Don’t you think the media revolution has made things hard for seasoned comedians?

For the veteran comedians who actually find themselves fading out gradually, it depends on how you actually showcase yourself, because everything needs rebranding. It is an era that is even supposed to be easy or easier for them to proceed ahead of the new ones because whatever the new comedians are doing, you can do better by packaging yourself towards that angle, and match them one by one as they are moving ahead.

So you don’t have to look at yourself and say because I’m a veteran, I can’t mingle with these ones, definitely, you’re killing yourself. You need to keep updating yourself. You need to feature in their kind of comedies. You feature them, they feature you, and at the end of the day, you keep moving ahead and seeing more followership and acceptance.

Have you taken your own advice as someone who has been around for a while?

Just like every other serious artist or entertainer, I rebrand and rebrand. And then I move along the new generation and old generation at the same time. How to make use of it is to actually study what people want to see, and you have to know the norms for real. I have done a skit with Broda Shaggi, and I have done several skits with Lawyer Kunle. Nedu and I have talked about coming together to do skits. By the time I’m done with this project I’m on, it is one of the things I’m going to start concentrating on.

You once advised cinemas to be selective in showing movies. Don’t you think this may affect the cinema industry, seeing as many viewers are already accustomed to watching movies online?

When I said cinemas should be selective in the kind of movies that they show, especially Nollywood, I wasn’t on the wrong path, because all I was saying is that it is not every kind of project that comes into cinema.

So, cinemas need to show the ‘best of the best’ movies, so as to keep people coming back for more. But then if you keep picking all sort of movies and scraps, with all sorts of mistakes: poor picture quality, poor sound, lot of director mistakes here and there, definitely people won’t return to watch at your cinema. 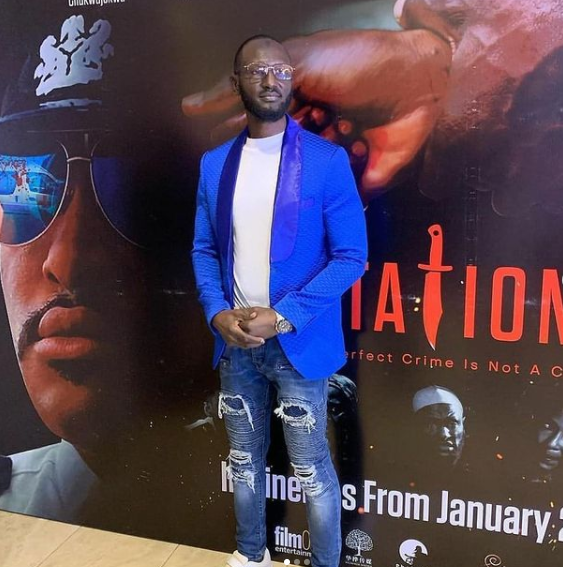 Many believe Nollywood is not developing as fast as Hollywood and Bollywood. What do you think the industry can do differently?

This shouldn’t be an issue to discuss. These people have been there for over a hundred years and then if you go to Bollywood and Hollywood, the Indian and American government have hands in the entertainment industry. Like you can see, James Bond is a British government project, now tell me what project is the Nigerian government sponsoring in the industry. When you look at the effort that got us here, it is individual effort, without massive contribution from the government. It is now that some of the private organisations started coming in to render support, which is making the entertainment industry huge now.

And if at the end of the day, Netflix could even open an office in Nigeria, Sony could do the same, then no one can say we are not progressing. We must also have a structure. So for somebody to say that the entertainment industry is weak, it is not moving ahead, I think that is false information because we are moving gradually.

Rok TV is an online company made in Nigeria that a lot of people are watching across the world today, and they are doing well, and tomorrow, I’m sure they will step up their game too. I’m also sure a lot of other investors are looking to come into our industry too.

What are the roles government should play to move the entertainment industry forward?

The government should make loans accessible to all in the industry. It should also help in building a structure and participate in the arts 100%, such as sponsoring, shooting, monitoring and marketing a project. The government support will help to fight piracy and fight for artistes’ rights and every other person involved in the entertainment industry.

What was life like for you during the pandemic?

I had time to gym, and time to sit down and discuss things with my family. I had time for social media, to read my Quran and before you know it, it is 24 hours. Sometimes you find out that the day is not enough, and I also had some interesting television programmes that I watched.

I had time to entertain my family, sometimes my wife becomes a better comedian than I am. My son always makes me laugh too. Sometimes, we take time to crack jokes in the house and watch programmes together, you would then find out that the day is not even enough. 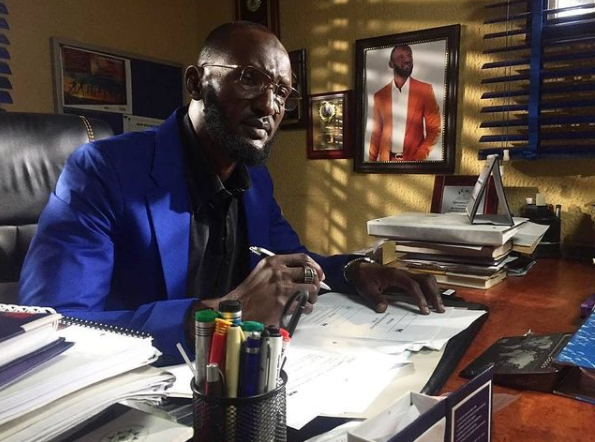 You’ve been an advocate of celebrities keeping their relationship off the internet. You must be proud of Don Jazzy’s ability to keep a lid on his failed marriage for so long.

I was actually shocked when I heard Don Jazzy was once married. As far as I was concerned, I believed that Don Jazzy had never gotten married but we were all surprised to hear that he was once married and got divorced.

We don’t actually know what transpired between them that led to the divorce but what happened is his own secret.

I think that now he is finding it difficult to get married maybe because he must have been affected by his first marriage and that gets him scared of marrying another woman. Other factors could cause the same too. Sometimes when you find yourself in this kind of situation, it gives you negative thinking and makes your life unbearable. You get afraid.

You and Don Jazzy seem to have something in common when it comes to marriage.

Don Jazzy and I share something in common because my first marriage also crashed and I got married for the second time. And the reason for the crashed marriage was as a result of incompatibility, then we amicably decided to part ways.

But the only thing that we have in common is the divorce issue. What caused his own, I don’t know, we may not have that in common, but divorce is divorce. I was able to let it go and then continue with my life and got married again. But the most important thing is to be happy.

What are your thoughts on insecurity in Nigeria?

What is happening in Nigeria is alarming because many innocent souls are lost on a daily basis, and in large numbers for that matter. In a situation where the population is increasing but job opportunities are decreasing, and the youths are rendered jobless, definitely there is no way you should not expect crime to be rampant and common.

When it is time for elections, you see politicians sharing arms and ammunition to youths and they go ahead to commit election crimes. After the election, they don’t give these ammunitions back. They go ahead to use these arms to fend for themselves.

A lot of our young boys and girls are also into drugs: codeine, rohypnol. They get high on these and lose their senses, they then start perpetuating all sorts of crime.

Another thing we should look at is how the Fulani herdsmen dropped their sticks to pick up guns. Who taught them how to use guns? There are a lot of political issues involved. There is a huge support for them to keep doing things they are doing.

Our security forces need to make some arrests, get to the source and start revealing some names of people involved, otherwise, it will not stop.

Are you planning on going into politics?

I am not looking forward to going into politics. That is why I have decided to be apolitical. I have nothing to do with politics. It is a gamble.