SPOTLIGHT: In Ojuelegba, there’s Ebere — who’s ‘destined’ to be an Okada rider

If the Ojuelegba axis of Lagos is your daily route, you may have at one point or the other come across Ebere Azubuike, the resident female Okada rider. Although Ebere got into the business of commercial motorcycling by accident, she’s convinced that it’s her fate to be in the male-dominated terrain.

“I believe my destiny is in Okada because it helps me feed my family and live well with it”, Ebere said, just as her male colleagues giggled and chuckled endlessly, making no attempt to shield their fascination at the attention she was getting from a reporter and photo-journalist.

The full moon was out, hence the night was further illuminated; which only increased the degree of attention Ebere received.

Gawkers and bystanders had started to gather.

“I am determined that I would do well with this Okada and so far, it’s been successful”, the tomboyish woman — possibly due to finding herself in a career deemed for men — added subtly.

She gazed away momentarily to examine her court of jesters and adulants, and after seemingly satisfied, she turned around and said: “I bought my bike when bike was 85,000 about three years ago.”

Having seen her bar and restaurant business come crumbling down, Ebere believes life has put her exactly where she’s meant to be.

“Business is not for everybody. Our destiny is different. I had joined business and didn’t make it. I sold in restaurants and beer parlour for about four years, but at the end of the day, nothing to show”, she added. 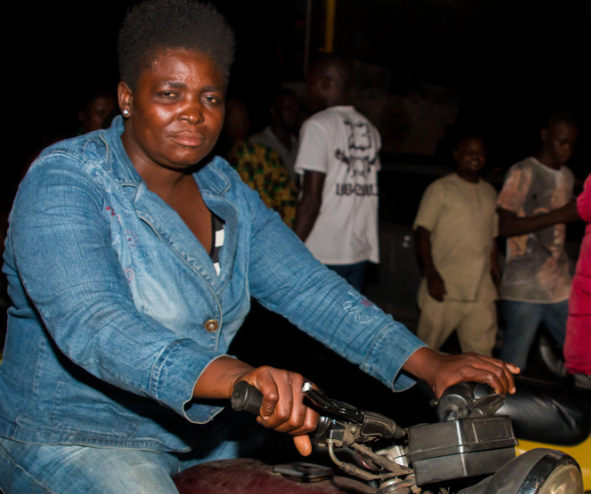 Ebere, like many Nigerians, was enthusiastic about the prospect of change coming to the country with the entrance of a new government in 2015, but at the moment, she feels the effect of recession on daily basis.

“Recession affected me because I don’t make as much as before because change has changed everything. In Nigeria now, a bag of rice is up to 20,000. If a customer wants to enter bike, they would underprice.”

Paying N100,000 as school fees for five children may seem like a tough deal but Ebere and her husband have managed just quite fine, she says.

But it is a survival attained through grime, sheer will, and unyielding determination.

Ebere’s husband was bed-ridden for over a year due to a strange ailment, and this took a toll on her; translating into longer working hours and self-deprivation for the sake of her family.

At the moment, she says, he’s much better and now able to contribute to the household by selling shoes at Ejigbo.

“Right now, what he has is acute headache but he’s moving around much better”, she noted. 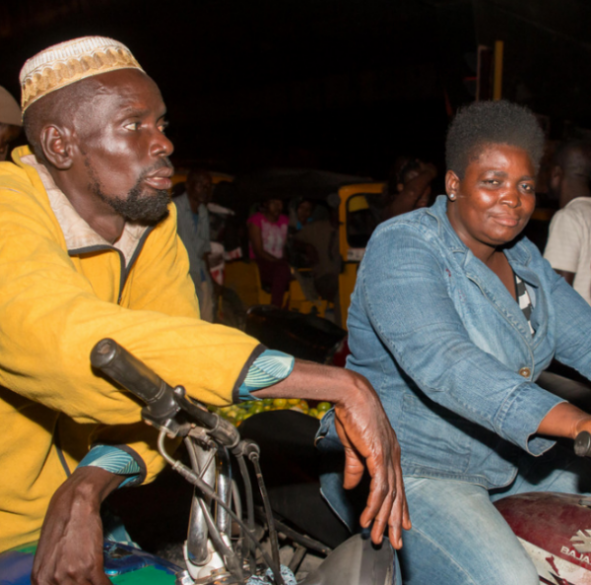 Rather than see her gender as a disadvantage in her line of work, she uses it to gain the upper hand. Ebere, oftentimes, attracts the most customers due to the peculiarity of being female in a “man’s occupation”.

“Sometimes, I use woman empowerment to overcome my male colleagues”, Ebere said, laughing hysterically as she explained that her male colleagues display a great deal of maturity when dealing with her.

“I communicate with them normally. What is in this life is manner of approach, depends on how you approach somebody. I am the only woman among them and if I mess myself up, they will mess me up.

“I am the only woman doing this business in this Ojuelegba side, but I met one woman plying Ikotun to Isolo route.”

The fact that two of her children are close to getting into university, which requires more money, doesn’t appear to faze Ebere.

She believes that as a result of her hard work, God particularly blessed her with bright children who hardly get into trouble at school.

“My first child has finished senior WAEC and my second child is in SS2, the third is in SS1 and the last is in JSS2,” she said.

“God just blessed me with my children. They are doing well. He knows my mind and whenever I cry, He hears my cry.

“Sometimes they pray for me and tell me — God will bless you. Just be patient.”

“My first daughter, who recently finished her SS3, always says — mummy in 2-3 years I will look after you. I must wipe away your tears.”

When asked what challenges she faces, she said: “There are not many challenges.”

“I don’t take care of everything. My husband assists”, she added, filled with positivity and unshakeable faith. 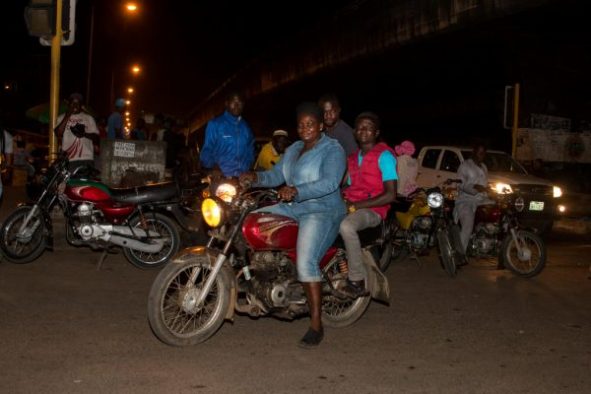 While she hasn’t ruled out the possibility of purchasing another motorcycle for hire-purchase, Ebere says anything can happen tomorrow — and she may find herself in another line of work.

“I have not bought another bike. I am just managing the one I have. The cost of a bike in the market is about N200,000”, she added.

Oromoni family cries out over ‘delay tactics’ in coroner inquest