Tonto Dikeh, the controversial Nollywood actress, has called out Kemi Olunloyo, the journalist, over her allegation that she’s into weapons and hard drugs.

The duo began exchanging words on social media after Olunloyo’s Instagram live session with Prince Kpokpogri, Tonto’s ex-boyfriend, wherein they talked about his demolished house and the actress’ involvement.

The journalist had slammed the actress for “clout chasing” with Kpokpogri’s predicament.

Olunloyo also accused Tonto of trying to feed the public with a “power image.”

Displeased by the journalist’s claim, the actress threw a jab at Olunloyo on her  Instagram story on Wednesday.

She also threatened to launch a new GoFundMe for Olunloyo because “she’s probably going back to jail”.

Reacting to the actress’ threat in a Facebook post, Olunloyo said Tonto could not take her to jail because she knows her secrets.

She also alleged that the movie star was in possession of a gun and had been using hard drugs.

The journalist claimed the actress purchased the gun in Ghana, in an attempt to kill Olakunle Churchill, her ex-husband.

Responding to Olunloyo’s claim in an Instagram post on Thursday, the 36-year-old urged the journalist to reveal the names of the people who claimed she was in possession of a gun.

In a subsequent post, she threatened to “run her up on the streets” if she doesn’t back up her allegation with proof.

“Madam Kemi please mention the name of this person, let’s confirm!! They already told me that you’re men#t&l challenged but I may just be your cure,” she wrote.

“Na Ogun true true go help me put you back in prison. Agbaya mummy, if you don’t mention the name of that person then you have bought the biggest bad market ever.

“I will you help you cure this your vile mouth. [email protected] k*ll you there. I don’t believe in suing you or police case mba’nu.. 2022 I’m running up on you b*****s on them streets and that’s on God.

“So if you don’t produce your imaginary friends name, or the receipt of the gun you claim I purchased? Kemi runnnnnnnnnnnnnn.” 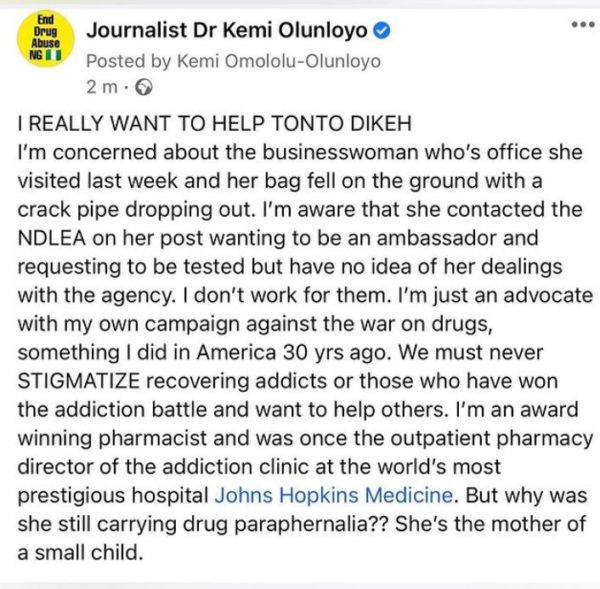 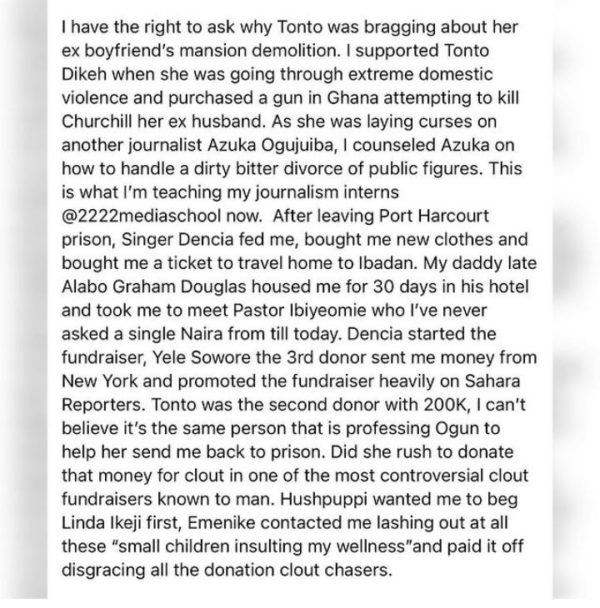 Ebube Nwagbo: I can’t act nude scenes — not even for a million dollars