I asked Angel to go for BBNaija after my failed attempts, says mum

Titi, mother to Angel, BBNaija season six housemate, says she asked her daughter to go for the reality TV show due to her inability to participate.

In an Instagram post on Monday, the 37-year-old said she and her friend had always craved to be on the show but the ambition seemed elusive over the years.

Titi said her quest to participate in the show had always been hampered by circumstances which often arise each time she tries to apply.

“A lot of you don’t know that before I asked my daughter to go for BBN, I and my girl chefyeide have been trying to go for it but something always comes up that we had to cancel it,” she wrote.

Titi, however, warned the public against insulting her over the post, threatening to block anyone who criticise her.

“If you come to my page to insult me I swear on the woman that gave birth to me I will insult you before I block you,” added. 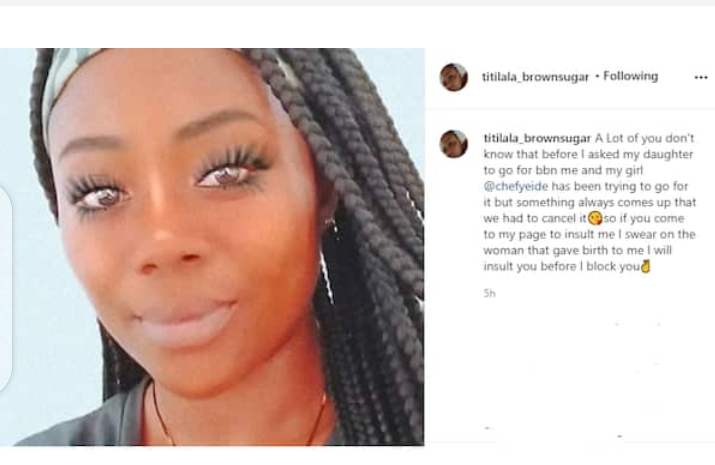 Angel is among 17 housemates remaining in the race for the show’s N90 million grand prize.

The reality TV star had earlier revealed that her mum gave birth to her at 16 after several attempts to abort her.

TheCable Lifestyle had also reported how the 21-year-old model broke down in tears while divulging her life struggles in a conversation with fellow housemates.

Majek Fashek, reggae icon, teams up with 2Baba on ‘No More Sorrow’