Gideon Okeke: Christians always first to send someone to hell

Gideon Okeke, a Nigerian actor, says Christians are fond of portraying God as a fiend with no sense of humour.

In a post on his Instagram story, the movie star also aimed a dig at some Christians who he said often tell people they are going to hell — an afterlife location where souls are subjected to eternal punishment.

The actor faulted the idea of people assuming the role of deciding who would go to hell or not, wondering if they had been there before.

“Christians always first to send someone to hell. ‘Oh, he’s definitely going to hell’…like they really knew the way there. And they make God out to be this huge fiend without a sense of humour,” he wrote. 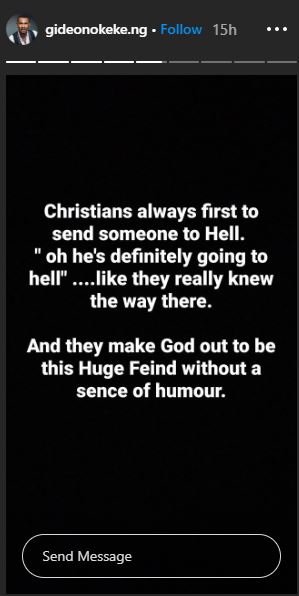 The model and TV presenter recently made the headline for advocating abolition of “state of origin” in the country, citing its damage to national development.

The actor tied the knot with Chidera Uduezue, his wife, at a decorated traditional wedding ceremony in 2018.

Tekno ‘arrested’ for dancing with semi-nude girls in Lagos traffic