FUOYE shut down after students clash with ‘okada’ riders

The management of Federal University Oye-Ekiti has ordered that academic activities be suspended till further notice after a scuffle between students and commercial motorcyclists.

In a bulletin signed by Oyeyimika Koyejo-Fasakin, the acting registrar, students were advised to proceed on mid-semester break immediately.

“The date of resumption will be communicated later. All students are therefore advised to proceed on the mid-semester break immediately.” 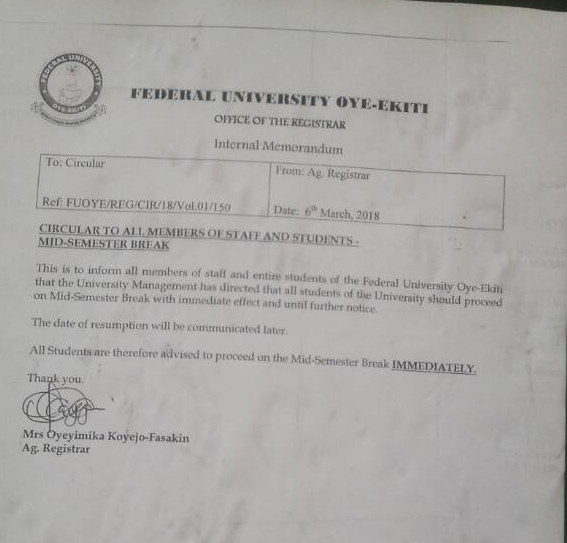 The Punch had earlier reported that 20 people were injured in the clash which began as a result of a disagreement between a student and a commercial motorcyclist.

“A source said the commercial motorcyclist slapped the student and that led to a fight between them, which the other students latched into,” the report read.

“The students had been angry over what they see as their exploitation by the commercial motorcyclists and sundry business operators in the community.

“Many of the students were stranded on campus as they could not leave because of the tension created by the fight.”

COVID-19: No student will be accommodated on campus, says UI