Davido’s relationship with Chioma is for God to decide, says aide

Isreal Afeare, Davido’s aide, says the Afropop star’s relationship with Chioma, his estranged fiancee, “is for God to decide”.

The logistics manager gave the reply during a question-and-answer session with his Instagram fans on Davido’s relationship.

Asked “what is the relationship between Davido and Chioma”, Isreal commented by saying “that is for God to decide”. 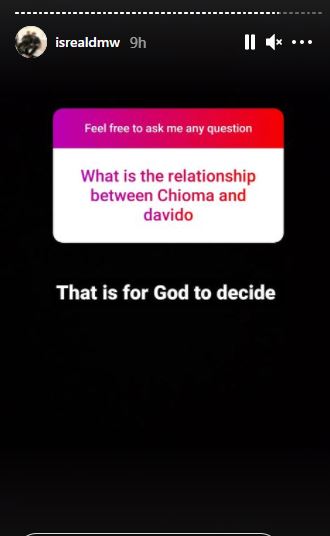 Although Davido and Chioma haven’t spoken of what went wrong, photos and videos of the couple mingling with their respective opposite sexes had earlier surfaced online in a way that suggested their relationship had gone south.

Rumours had also swirled on social media about an affair between the ‘OBO’ crooner and Mya Yafai, a US model.

Earlier, Clarks Adeleke, Davido‘s cousin, had also waded into the dispute between the singer and his fiancee.

“I just want to say something to you today. No matter what happened between you and my brother, just know that he really loves and appreciates you no matter what. And you need to understand something,” Clark had told Chioma.

“You guys were friends before anything. You have a beautiful song together. No matter what you’re doing, put your song first. I pray the Lord keeps you in good health and grants your heart desires.

“I love you so much and I’ll always be there, no matter whatever happens. Happy birthday, Chioma, from the whole Adeleke family.”

‘Thanks every one of you’ — Femi Otedola celebrates 1m Instagram followers