On June 4, the federal government announced the indefinite suspension of Twitter’s operations in Nigeria.

Lai Mohammed, minister of information, had said the government was forced to act because of “the persistent use of the platform for activities that are capable of undermining Nigeria’s corporate existence.”

The development had generated intense criticism from many Nigerians as it took a toll on organisations and businesses that depend on the platform to promote their services.

Amid the ban, affected organisations have been taking advantage of alternatives ways of sustaining their activities.

The Big Brother Nigeria (BBNaija) reality TV show is one of the programmes affected by the continued suspension of Twitter in the country.

The sixth edition of the show titled ‘Shine Ya Eye’ commenced on July 24 — about 50 days after Twitter’s suspension in Nigeria.

Data by TheCable Lifestyle in collaboration with the Future of Work (FOW) showed that the show’s season six has low fans’ engagement in its first two weeks when compared to that of last year.

The fifth season of the show christened ‘Lockdown’ started on July 19 and lasted till September 19 last year.

To ascertain the actual effect of Twitter’s suspension on the show’s fans’ engagement, TheCable Lifestyle and the Future of Work (FOW) compared the total amount of tweets the show had in its first two weeks last year to that of the sixth edition.

The number of Twitter users that tweeted about the show during the first two weeks of both seasons were also examined.

Findings revealed that during the first week of last year’s edition for instance, a total of 204,712 users tweeted about the show.

When that of this year was considered, however, the figure reduced to 102,762 users who tweeted about the show in its first week.

An analysis of the total tweets about the show during the first week last year also showed that there were 678,904 mentions.

The figure, however, dropped to 401,034 tweets recorded during the first week of this year’s edition. 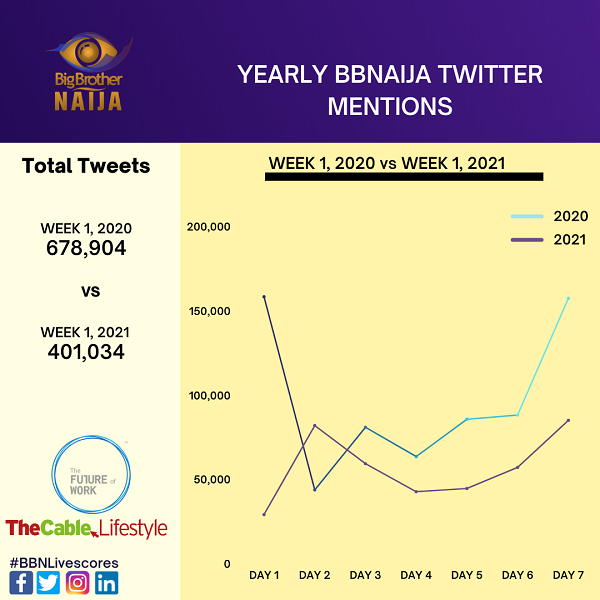 During the second week of the reality TV last year, a total of 175,340 users tweeted about the show but this year had only 90,942 users within the same period.

A breakdown of total tweets recorded during the show’s second week last year showed there were 697,165 mentions while that of 2021 had 430,251 tweets.

The foregoing means that between the first and second week last year, 380,052 Twitter users tweeted about BBNaija while that of this year 193,704 had within the same period.

The figures imply that less Twitter users tweeted about the reality TV show this year within the first two weeks when compared to that of the same period last year due to the ban. 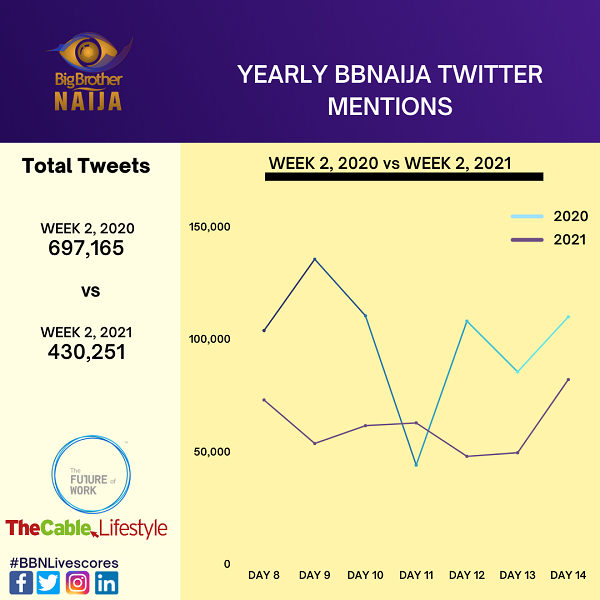 Checks by TheCable Lifestyle for instance revealed that the show’s Twitter account with 1.4 million followers has not been updated since June 3 due to the ban of the platform.

Last year’s edition, won by Laycon, had more engagement on Twitter — a development boosted by the restriction of movement by the government to contain spread of COVID-19 in Nigeria at the time.

The restriction forced many people to stay at home for a long spell last year, affording many lovers of the show the time to closely follow its activities.

But this year’s edition hasn’t been the same as there is no such restriction in place again while Twitter also remains suspended.

While many Nigerians bypassed the ban via virtual private network (VPN), the suspension has disrupted the usual buzz that comes with the social media platform in Nigeria.

Leveraging on the alternatives

The organisers are also leveraging on partnership with media outlets as well as the show’s website to further publicise the programme.

It remains unknown if the federal government would reverse its suspension of Twitter in the country anytime soon.

On Wednesday, the federal government said the US-based micro-blogging platform has agreed to open its office in Nigeria, with hints that the impasse could be resolved in the coming weeks.