Anthony Joshua, the WBO world heavyweight champion, has recounted his journey from boarding school in Nigeria to jail and how Mike Tyson inspired him to become a boxer.

In the July 2021 issue of British Vogue, the 31-year-old Watford-born boxer narrated how he moved to Nigeria briefly at the age of 11 after his mother decided to establish a business in the country.

“I’ve always known Africa as the motherland. Like, out in the world is England, but in my house is Nigeria. My parents are still very attached to their roots,” he said.

“That’s where they were born, that’s where their friends are. They’ve always travelled backwards and forwards. When I was 11, my mum set up a business there and we went, too.”

Joshua said he was enrolled in a boarding school where he spent nearly one academic session before he returned to the United Kingdom.

He described the condition as “tough,” with “no-nonsense” teachers drilling austerity into the lives of the students.

“I spent about nine months in a boarding school,” he said.

“You’re woken at five in the morning and if you don’t wake up, the teachers burst through the door. You go and fetch your water, shower, iron your clothes, and then school starts.”

Shortly after Joshua returned to the UK, his parents divorced while his life thereafter pivoted for an unattractive end.

A product of a broken home, he suffered a bit of crack himself.

The shattered mirror of his mind couldn’t focus on just one thing, so he “stopped all sports” and sought the false calmness that comes with “smoking” which eventually landed him in jail.

“I had left school, and I was a Jack the Lad, you know what I mean? My mum had moved to London. I didn’t want to leave Watford, so I was moving from one auntie’s house to another auntie’s house. Then I got my own little place when I was like 16, 17, and I stopped all sports and stuff like that,” he said. 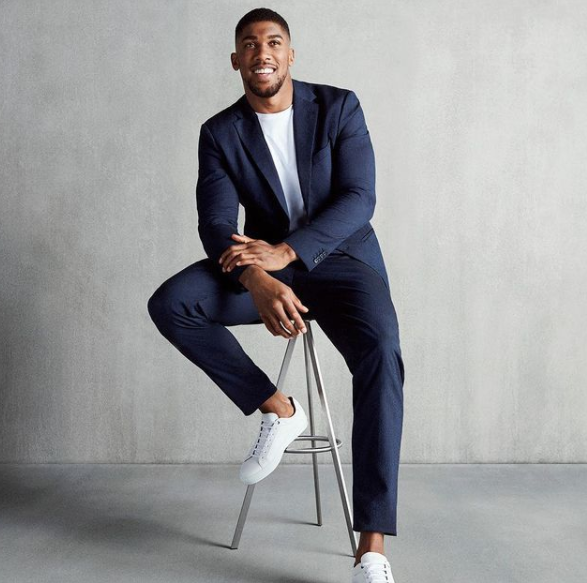 “That’s when I started, you know, smoking a bit, doing my own thing. And then I got banned from my area in Watford. I wasn’t allowed to go back. I was in jail for a little bit, and on tag for about 14 months.”

After leaving prison, Joshua said Ben Ileyemi, his cousin, taught him the basics of boxing. Amidst all the introduction to the pugilistic stances and punch combinations, he watched Tyson — who was then the undisputed world heavyweight champion — closely.

“Yeah. When I moved from Watford into London, I started chilling with my cousin, and he was boxing at the time. I was driving, so I’d take him to the gym,” he said.

“I was doing weights, banging up my triceps. Then after a little while, my cousin gave me some shorts and boots and taught me how to wrap my hand. Then I discovered Mike Tyson.”

While the jaw-shifting jabs and gut-busting hooks of Tyson attracted the rest of the world, it was, however, the unattractive side of the American story that caught Joshua’s attention.

“I saw this kid who had been about 13-years-old getting into a whole heap of trouble, from a bad background, where you’re deemed the worst in society, who became one of the most praised champions that the world has ever seen, all through hard work and discipline. I felt like I could do the same thing. So I took boxing a little bit more seriously,” he said.

“Where we grew up in Watford, it wasn’t about being rough – obviously you had to back yourself – but we were hustlers. So I took the hustler’s mindset from Watford and I just put it into boxing and navigated my way through with good manners. I walked into the gym still on tag – I had to rush out at 7:40 pm to be home by eight o’clock.

“Three years later I went to the Olympics and represented Great Britain and got a gold medal. It happened really quick. But it just showed real discipline. It’s fine to fail, but don’t get disheartened. Build, go again. That marathon mindset is what’s got me through my boxing days and that’s what I’m still using as motivation now.”

Joshua will be returning to the ring in September against mandatory challenger Oleksandr Usyk, after the £200 million undisputed world heavyweight bout with Tyson Fury was hampered by a US court ruling.

Brad Pitt: I used to drink every day… I ran our winery to the ground

Femi Kuti to perform at Hollywood Bowl in June