Badirat Adeyemi, the estranged wife of Alaafin of Oyo, has admitted to undergoing cosmetic surgery.

“How long will you keep sitting down. We already know you did BBL. Stand up and flaunt what your Dr gave you,” the fan had said, making reference to her picture.

Reacting to the follower, the ex-queen admitted to having undergone a Brazilian butt lift (BBL).

She also dismissively asked that she be left alone on the subject.

“Madam, if it is BBL, please kindly do your own now. Abi?” she wrote. 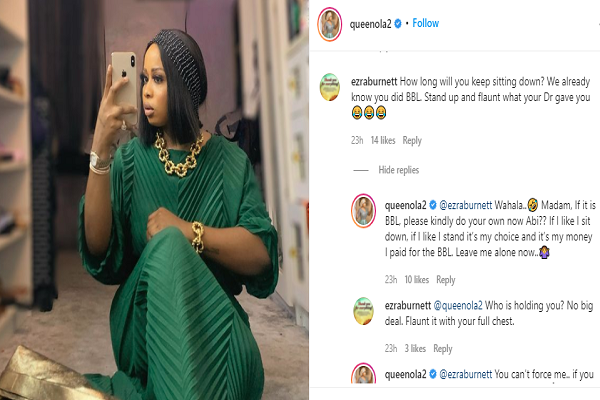 Brazilian butt lift (BBL) is a gluteal fat grafting procedure. It utilises excess fat collected from other areas of the body to add volume to the buttocks.

Badirat’s move sees her join a list of public figures who have admitted to augmenting their physique.

In 2019, Tonto Dikeh, an actress, had explained that she had to undergo plastic surgery to have her buttocks fixed.

In 2020, there were rumours that Badirat was sent packing from the Alaafin’s palace over alleged infidelity.

She, however, reacted to rumours which claimed she had an affair with Kwam 1, the ace singer.

Five ways to boost your small business with Google Maps