Rumoured affair with KWAM 1 was after I left palace, says Alaafin’s ex-wife

Badirat Adeyemi, an ex-wife to Lamidi Olayiwola Adeyemi III, the Alaafin of Oyo, says rumours of her affair with Ayinde Wasiu, a Fuji star better known as Kwam 1, was after she left the palace.

She spoke about her exit from the palace during an interactive session with fans via her Instagram story on Monday.

In one of the posts, a fan had asked: “Did you leave the palace because of the dating rumour between you and King Wasiu?”

Clearing the air with her response, which was shared via the same medium, the skincare entrepreneur wrote: “I left before the rumour.” 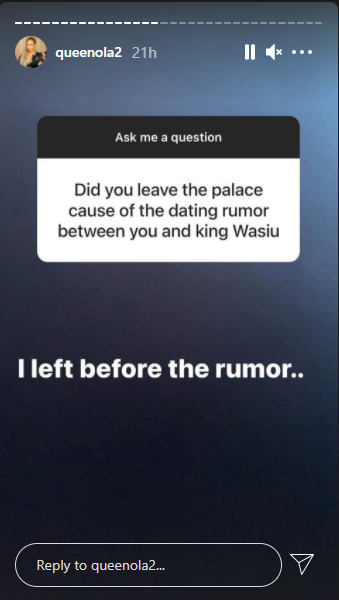 Some months ago, rumours had swirled on social media that Adeyemi, who was the youngest wife of the Oyo monarch at the time, was sent packing from the Alaafin’s palace over alleged infidelity.

Kwam 1 had also issued a statement wherein he denied the allegation of infidelity levelled against him.

“Ordinarily, one would have waved off this allegation as one coming from the warped mind of one possibly numbed by high COVID-19 fever,” the Fuji musician had written.

“Let me state that these are lies concocted from the pit of hell by those whose aim is to drag to the mud, the name of K1 De Ultimate and ultimately that of the most revered kingdom in Yoruba land.

“These agents of Lucifer have continued in their warped delusions to see K1 go to the ground just for being conferred with the title of Mayegun of Yoruba land.

“The Alaafin’s crime is the conferment of the honour, hence the grim plot to drag him down also. Moreover, the highly respected Monarch and his Olori have both debunked the story as unfounded.”

TheCable Lifestyle also reported how Aanu Adeyemi, another wife of the Alaafin, said she had decided to quit her marriage to the monarch.

PHOTOS: Tears as Baba Suwe is buried in Lagos