WhatsApp, a Facebook-owned instant messaging platform, would be introducing four new features that could potentially change the way its application works.

In November 2019, Whatapp had introduced its fingerprint lock feature for android users on the heels of several other changes and policies it had put up to improve user experience.

Although the platform is yet to announce the precise date when the features would be introduced and how users are to proceed, it is believed that these would be taking effect in early 2020.

WhatsApp had earlier announced that it would start to take legal action against users who send bulk and “non-personal” content through its platform starting from December 7, 2019.

However, the reverse image search feature would be coming to complement the platform’s effort at clamping down on the spread of fake news by tracing such messages to its original curator.

This would be coming after the app had introduced a feature that allows users to identify forwarded messages as well as limiting their possible number of forwards to five.

Another important feature expected to emerge in 2020 is the introduction of ads to status posts as a way of further monetizing the application.

– WhatsApp for Businesses to get richer messaging format options

This was said to have been revealed during the 2019 Facebook Marketing Summit which held in the Netherlands.

While the feature is currently operational on Instagram, according to WaBetaInfo, it is believed that the ads “won’t be invasive and they will appear very rarely between a lot of status updates.”

There’s the dark mode on Twitter. Telegram has it. But WhatsApp’s as remained elusive about it. It is now believed that the feature would finally arrive in 2020.

If you would like to see the dark theme temporarily and legitimately, you should use this "dark theme bug" (WhatsApp for Android).
Sometimes it shows the dark theme. pic.twitter.com/H4itG76egf

WABetaInfo, a Twitter account that tracks the latest features and releases of the app, had discovered the first hints at the gloomier appearance in summer 2018.

While the pitch-black would expectedly act as some sort of battery-saver, the greyscale, as it is obtained on Twitter would suit those looking to ease their eyes while using their smartphones late at night.

According to WABetaInfo, WhatsApp is working on a new feature that potentially allows users to set a timer on their texts such that they can self-destruct after a certain time has elapsed.

However, group chats will be able to put up a preset rule about the feature such that every text message, photo, video is only allowed to disappear after either one hour, one day, one week, or more. 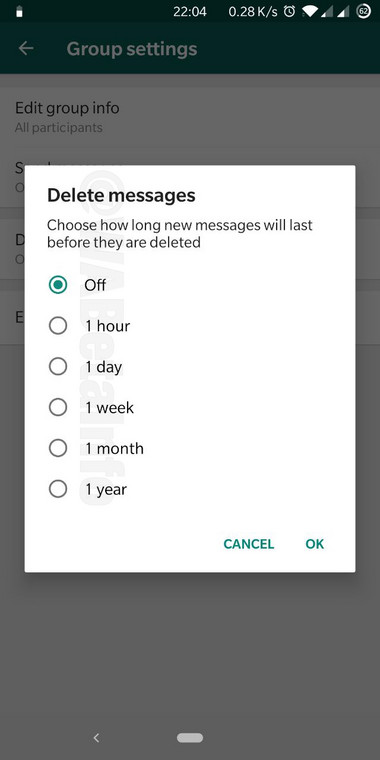 WhatsApp, which is used by an estimated 1.5 billion people, has introduced a number of new features over the last 12 months — including group chat privacy options and private replies.

Six common habits that may damage your smartphone