Zahra Buhari-Indimi, daughter of President Muhammadu Buhari, says the discovery of COVID-19 palliatives in warehouses across the country has absolved her father of claims that he is Nigeria’s problem.

The past few days have seen warehouses in different states come under attack from mob who in turn loot food items distributed by the federal government as palliatives to cushion the hardships brought about by the coronavirus pandemic.

Lagos, Edo, Plateau, Osun and Kwara are among states that have had their warehouses raided in the wake of the unrests occasioned by the #EndSARS protests.

Earlier this year — during the months of lockdown brought about by the novel disease — several Nigerians had called out the president for not providing the needed palliatives for the people.

But following the attack on warehouses, governments of the affected states have continued to face heated backlash, with citizens lambasting them for keeping palliatives meant for the people amid widespread hunger.

Reacting on Saturday in a post on her Instagram story, Zahra said recent happenings have shown that her father indeed distributed enough palliatives across the country, contrary to speculations.

“Now that people confirmed that Buhari distributed enough palliatives nationwide, it is clear Buhari is not our problem,” she wrote. 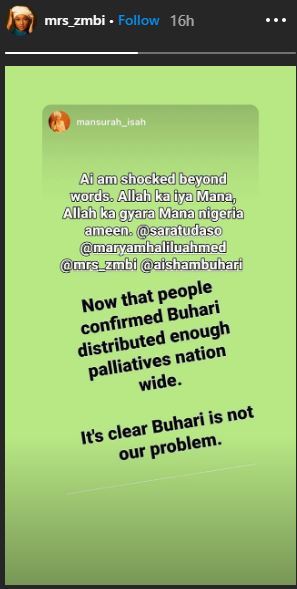 Several states including Plateau have since condemned the attack on their warehouses, explaining what informed the delay in the distribution of the palliatives.

Yul Edochie: Spending so much money on burials, a total waste