Nigerian singer, Ayo ‘Wizkid’ Balogun, has won a songwriting award for his contribution to ‘One Dance’, the hugely successful 2016 song by Aubrey ‘Drake’ Graham, Canadian rapper.

Wizkid on Thursday shared a picture of his plaque from The American Society of Composers, Authors and Publishers (ASCAP).

He added the caption: “This came in last night! Big up my bro @champagnepapi for letting me work on this!! More Drake x Wizkid on the way.” 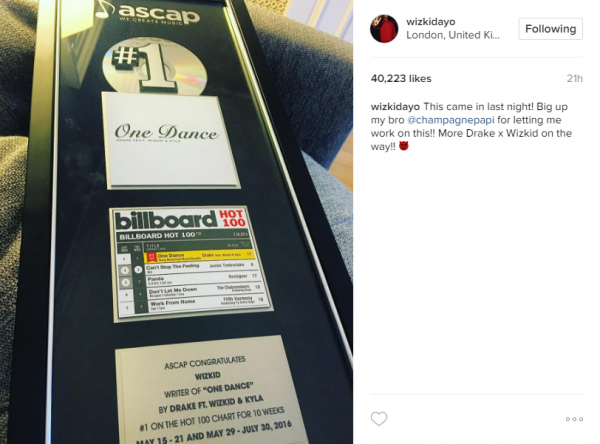 The Starboy label boss was featured alongside Kayla on the record-breaking One Dance.

Asides being one of the highest-selling songs of 2016, One Dance spent ten weeks atop the Billboard charts and fifteen consecutive weeks topping the UK charts.

One Dance is also the most streamed song in the history of Spotify, a music platform.

With over 880 million streams, the song surpassed the previous record-holder Lean On, a joint effort by Major Lazer and DJ Snake.

Hush Up The Silence, a slow-paced Caribbean-influenced song by Drake and Wizkid, recently leaked on the internet.

Black Widow, Finding Hubby… 10 movies you must see this weekend