Toni Payne: How AY refused to allow Olamide perform at his show as a rising artiste

Toni Payne, former artiste manager, has narrated how AY, a comedian, allegedly turned down her request to allow Olamide, a singer, perform at his show before stardom.

In a lengthy post on her Instagram Story, Payne, the ex-wife of 9ice, an indigenous singer, said he was managing Olamide, who was then an upcoming artiste.

Payne explained that based on the fact that she was on good terms with AY, she had approached him to allow the ‘999′ crooner perform during one of his shows.

She said to her surprise, the comedian turned down her request, a development, she said “pained” her, because she had also rendered him help in the past.

According to her, there has been no love lost between the two since the incident happened.

“Lol… I was speaking to a friend today and it reminded me of one story when I was managing Olamide… I stopped speaking to comedian AY cos of this incident and honestly till today, I’m glad I did cos I don’t like people with that sort of character,” she wrote in a mixture of Pidgin and English.

“So me and AY used to be cool. I’d done favors for him in the past, no big deal. When Olamide was coming up, I decided to ask cash in a favor and ask if Olamide could perform at his show even if it’s for a minute.

“The man (AY) refused to give the boy a chance. It pained me. I took the L and lamented for weeks. Lmao! No wahala, we sha kept it pushing. Anyways fast forward to the next year, Olamide had started doing well and guess who conveniently needed a favor, and wanted Olamide to perform? Oga comedian. 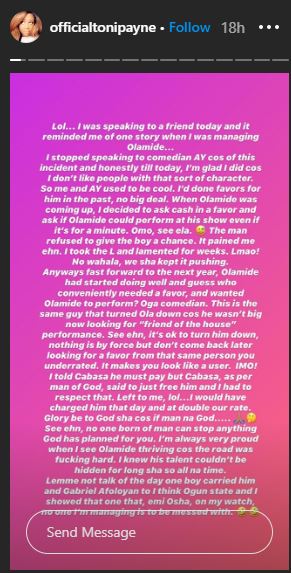 Payne went on to recount how AY would later approach Olamide to feature him on his show despite “underrating” him earlier.

“This is the same guy that turned Olamide down because he wasn’t big now looking for ‘friend of the house’ performance. See ehn, it’s ok to turn him down, nothing is by force but don’t come back later looking for a favor from that same person you underrated. It makes you look like a user,” she added.

Burna Boy: I was on toilet seat when I was called for Coachella