Sammie Okposo, the Nigerian gospel singer, has apologised to his wife, family, friends, and fans for what he described as his recent act of infidelity.

The singer, who is still married to Ozioma, his wife, took to his Instagram page on Tuesday morning to put out a statement where he confessed to getting intimate with a woman during a trip to the United States.

As part of what he described as his efforts toward “making peace with God”, Okposo said he will be suspending himself from “ministry activities”.

“I need to bring a very unfortunate incident to your attention as I am not proud of it but know that this is the right thing to do,” he wrote in the statement.

“On my recent trip to the USA (late 2021), I got intimately involved with a lady, knowing that this was not appropriate as a married man and a minister of the gospel.

“I am ashamed and regret my actions as it has caused a lot of pain to my dear wife, Ozioma, my family and I.

“As I work in making peace with God, repenting and asking for His forgiveness, I am suspending myself from all ministry work until full restoration as this is what is proper and what I know I owe God and His people.” 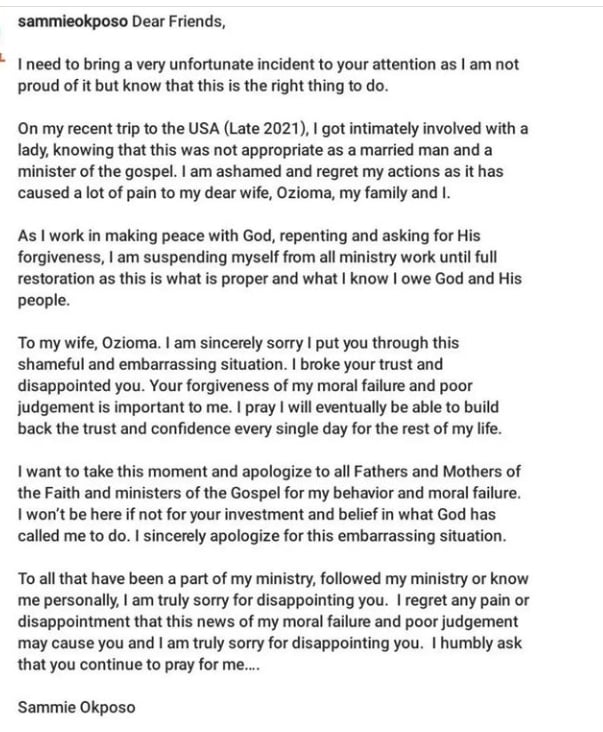 Over the years, Okposo has established himself as an international gospel artiste.

He is also a music producer, psalmist, and the CEO of Zamar Entertainment.

He released his first album ‘Addicted’ in 2004 and has since collaborated with many other artistes in the gospel and soul music fields.

His most recent album ‘The Statement’ (2018) was produced by the Grammy-winning Kevin Bond.

‘We fly first or business class’ ⁠— Sophia hits back at Davido

Ibinabo Fiberesima: My account of the accident that killed Suraj Giwa (long read)