Matrix Homes & Properties Limited, a real estate and property firm, has fired Baba Ijesha, the Nollywood actor who recently confessed to molesting a 14-year-old girl, from its ambassadorship deal.

Baba Ijesha has been in news in recent times after he admitted to assaulting the minor, who is a foster daughter to Comedian Princess, both when she was 7 and 14.

Following his arrest, the actor has remained in police custody where Hakeem Odumosu, the Lagos police commissioner, said he would stay pending legal advice from the ministry of justice.

On Friday, Matrix Homes released a statement via its Instagram story wherein it disassociated itself from Baba Ijesha.

The firm also stated that the actor ceases to be its brand ambassador due to “his recent misconduct”.

“Matrix Homes and Properties Ltd wishes to bring to the attention of our customers and members of the public that Omiyinka Olanrewaju James AKA Baba Ijesha has ceased to be a brand ambassador of our company,” it said.

“…following his recent misconduct which is antithetical to our company’s values. Matrix Homes and Properties, therefore, disassociates itself in entirety from Baba Ijesha.” 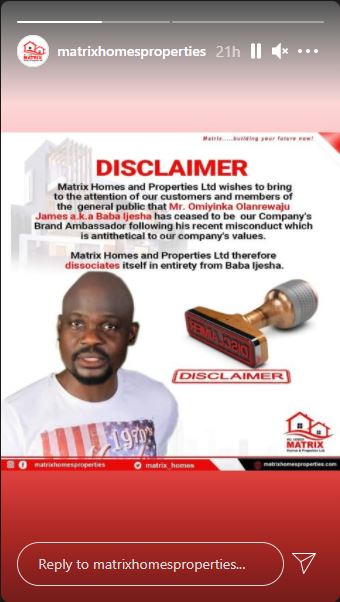 While Baba Ijesha only said he assaulted the victim, the Lagos State Domestic and Sexual Violence Team (DSRVT), which stated that it is following up with the case, added that the rape claims against him are not being ruled out.

Omotola: I contracted COVID-19, I’ve been ill and in isolation

EFCC: How we arrested Mompha’s Lebanese ‘collaborator with charms’