A certain Nigerian lady has “poked the bear” on the country’s Twittersphere after she taunted a “mysterious” young man, she claimed is a first-class graduate but earns N80,000 per month in a commercial bank.

The #RedFlag hashtag became a trend on Friday as users took to the microblogging platform to share what turns them off in the opposite sex.

The lady — with the handle (@juciestofjays) — decided to jump on the trend to call out Seyi, who she said she has had an encounter with off the social networking service.

She berated him for complaining too much about “her wig when he still earned 80k as a contract staff in the commercial bank”.

“You said you graduated with a first-class but you’ve been working in UBA as contract staff since 2017, still waiting on that 80k to upgrade to 120 but you can complain about someone’s wig? Face the one that’s doing you, Seyi,” she wrote. 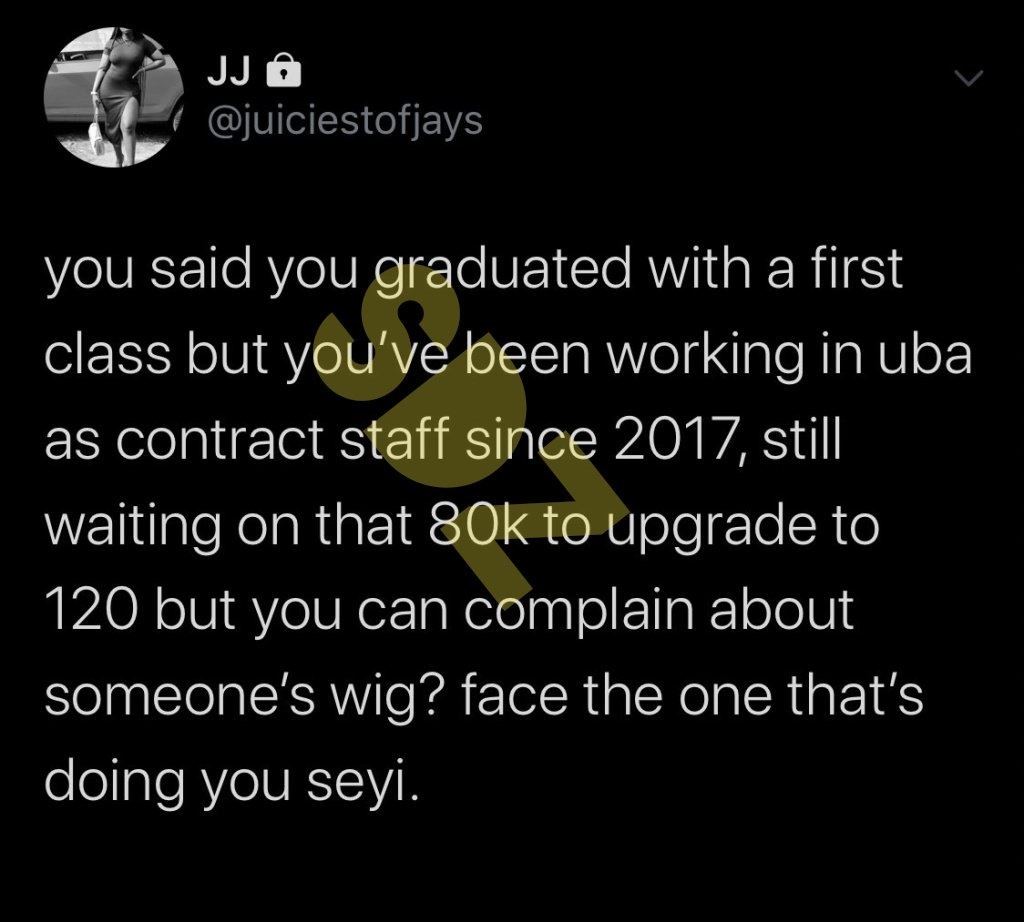 Her statement did not go down well with a huge number of users who swarmed the social media platform to register their annoyance.

“Imagining people dragging Seyi UBA because he’s earning N80K per month but they can’t boast of stable income themselves. There are levels to this insanity. Awon Giveaway followencers! Na dem,” another user said.

Many of you ladies dragging Seyi UBA are pretending that your brothers are unemployed but what do I know. Ah aunty! Even you?#Redflag🚩 pic.twitter.com/EixWhVLzqw

See how your foolsihness has favoured him. You're still in school yet you're calling out a first class graduate who's trying to make ends meet. Ordinary bants and fun, u took it personal.

Imagining people dragging Seyi UBA because he's earning 80K per month but they can't boast of stable income themselves. There are levels to this insanity 😩

The lady has freely advertise SEYI UBA to the world.

Your 1st Class will speak for you.
You shall find a better job.

This is my prayer for you.
God works in mysterious ways & he'll surely make a way for you.

The Seyi UBA nigga really won today, after getting dragged for earning 80K he has been offered a job twice that salary. When the Lord prepares a Table before your Enemies

This Seyi Uba bant is the reason why people don’t open up to some of you. How can someone tell you what he earns in confidence, than you thought it wise to slander him with the info.

This story of Seyi UBA is the reason most people don't open up about the details of their job to anyone ?

Lawrence, how far, how much them dey pay you ?

Me : My guy you see that Rashford goal the other day ??

But let's continue with the program 😉

Only in Lagos tho😭

With 80k per month in Ibadan, you are a big boy.

With 80k in Ijebu, them go talk say nah Yahoo.

With 80k in Osun State, you go dey use escort 😭

With 80k in Kogi, nah you and Yahaya Bello dey run things.

Seyi uba don’t be bothered. It’s a great thing you are not satisfied with your current pay. It’s only a matter of time. Just to encourage you:I started my career 2011 in a manufacturing company in Agbara with 55k, today my pay is 850k and I am less than 30. So this time will pass

That Seyi UBA tweet is paining me. Person open up to you bayen and you use it as bants haba.
😔It's not his fault, this country is useless.

Seyi UBA, you doing better than 70% of people on here, dont sweat it cause the 120k or more is near.

You are dragging Seyi UBA for earning legit 80k monthly and you re also dragging Mompha for indulging in fraud
Hanty pls what exactly is the colour of your problem pic.twitter.com/LpXtoWjAfc

Seyi UBA just got job offer paying doble for being dragged for a job of 80k
God when would my enemies elevate me?

Went through the Seyi UBA thread ! Some people just decided to legalize their stupidity! If you earn 80k as salary right now! It can only get better, you rise from the bottom, you don’t want to move from above to below

Lmao, so an undergraduate that's still probably collecting pocket money is dragging Seyi UBA, for earning legit 80k worth of salary. Salary so many people will kill to earn.

Calm down undergraduate, life isn't as rosy as you think. 😂

Most of us are Seyi UBA.

But all we do is groan inside and push through daily.#TravailsOfNigerianYouths

Seyi UBA is been dragged for collecting 80k as salary. Lol.
He's not doing Yahoo, he's not robbing people of their money. Man is working. Legit work oh!!! Work that even me I'm praying to see right now. Even corpers that passed out yesterday too are dragging him🤣😂🤣

Every disappointment remains a blessing. Thanks to the person who tried to drag a certain SEYI UBA, because of you God will uplift him, he would get a far better paying job. He would have the last laugh. Thank you for exposing him to his helpers.

It’s men that I blame for this stuff. Unilag girl is shaming Seyi UBA for earning 80k.

When y’all be running after and throwing your resources on entitled women who don’t earn shit, they begin to overvalue themselves.

Five ways to write official emails like a pro