Omotola Jalade-Ekeinde, a Nollywood actress, has come under intense criticism on Twitter over a post wherein she appeared to have questioned the authenticity of “live lost” during the #EndSARS protest in Lekki area of Lagos.

There has been a controversy over the deaths as most of the persons said to have been killed had debunked the reports.

Obianuju Udeh, a disc jockey better known as DJ Switch, had also insisted that at least 15 persons were shot dead on the night while several others sustained injuries of varying degrees.

Due to the inconsistency in the number of casualties, the 42-year-old movie star had taken to her Twitter page to call on Nigerians to stop the sensationalism if there were no deaths.

”If People died during the Lekki Toll Assault, let their people speak out please and if there were No deaths then enough with the sensationalization because it does not remove from the Crime that happened. PEACEFUL PROTESTERS WERE ATTACKED. WHY? BY WHOM! #EndImpunityinNigeria,” she wrote in a now-deleted tweet on Friday.

“Everyone who was involved in turning the protest into a violent rollercoaster should now be brought to book, if not then everything else is a lie! calling on journalists, investigators, NGOs, please we have work to do. No lies, no fear.” 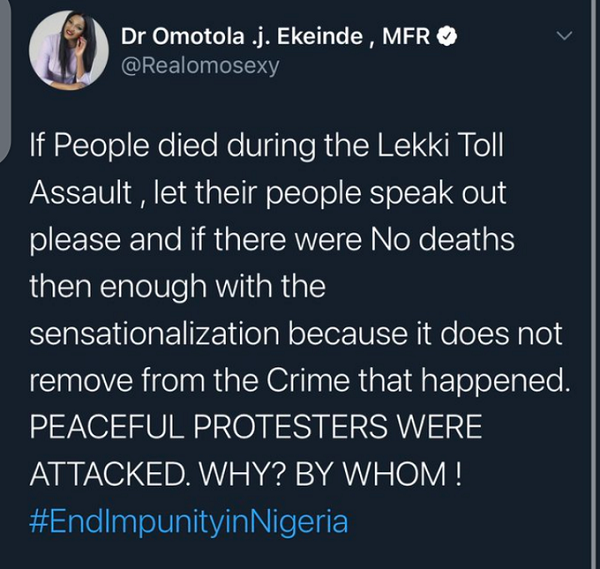 EVERYONE who was involved in turning the protest into a Violent Rollercoaster should Now be Brought to book ! If not, then everything else is a LIE ! Calling on journalists, investigators, NGOs pls we have work to do. No lies , No fear. #NewNigeriaisstillpossible #Focus #Letsgo

The first tweet appeared to have angered some Nigerians on Twitter who expressed their disappointment at the mother of four for being “insensitive” with her comment.

In a follow-up tweet, Omotola apologised while stating that her words were taken out of context.

”I hope you know I don’t doubt people died! I hope you understand that we need to collate these now and not continue with the I’m disappointed I’m leaving talks. Get Angry again. We Can’t stop,” she said.

I hope you know I don’t doubt people died ! I hope you understand that we need to collate these now and not continue with the I’m dissapointed I’m leaving talks. Get Angry again. We Can’t stop. #EndImpunityinNigeria #EndPoliceBrutalityinNigeraNOW #EndBadGovernmentinNIGERIA

Her apology was, however, not enough to calm frayed nerves as a number of users kept attacking the actress on Twitter.

“Sad Omotola had to tweet this. Like she’s also among those that didn’t believe people lost their loved ones in Lekki massacre? This is a huge shame,” a user wrote.

Sad Omotola had to tweet this. Like she's also among those that didn't believe people lost their loved ones in Lekki massacre? This is a huge shame 🤦‍♂️🤦‍♂️🤦‍♂️ pic.twitter.com/BW172WQeTY

There are people in Omotola’s replies cheering her on. This is how people will start to argue that nobody was even shot at all. We watched them die for goodness sakes! What kind of wickedness is this?

Omotola is a proof that Blue tick doesn't guarantee Sense. Adamu and others included tho but let's focus on Omotola fess..

Beauty without Brains. No sense, just fine face and stupidity.

Omotola Jolade said the families of those who supposedly died in Lekki should come out and speak if it truly happened and her followers are tearing her entire life apart. Why can't these people be reasonable for once? Why can't they move past being emotional and critically think?

Omotola Jolade is a psycho!!! A very foolish human being

Who even gave Omotola a doctorate degree?

Dangote asked the government to ban importation of tomatoes

They found another warehouse filled with Covid-19 palliatives at Ilorin

Gov Obaseki awaiting All Benin Prisoners to return back to the prison.

No wonder they use Omotola for ritual in movies, she doesn't have sense in movies and real life too.

Look at what Omotola said about the dead Lekki victims. A mother ooo!! pic.twitter.com/7MEOv6HwOH

Omotola no too bright like that normally sha.
Just brain with vibes and sawdust.

Omotola is the first influencer the government have paid to spill nonsense… More to come!

Who is more relevant

So Omotola went to #EndSARS protest ground for photo shoot

Over 70 people lost their lives on Tuesday night for this cause and Omotola just opened her mouth to say rubbish? Omo the thunder that’s loading on these people eh

Omotola Jolade is cancelled!! Not that she was really relevant sef, oloshii