Nigeria’s women have been ranked as the highest consumers of skin-whitening creams in Africa.

Whitening creams are cosmetic products that reduce the melanin or pigment in the skin to make it appear lighter.

Lighter skin is believed to be associated with beauty and better social prospects like marriage and employment.

The skin-whitening industry predominantly caters to women worldwide and people of colour in every region.

It was reported that women account for an estimated 80 percent of the sale of skin-whitening products worldwide.

Data drawn by CNN ranked Nigeria as the top consumer of these creams, with 75 percent of its women patronising whitening products.

This is followed closely by Senegal at 60 percent, Mali at 50 percent, and Ghana at 30 percent. 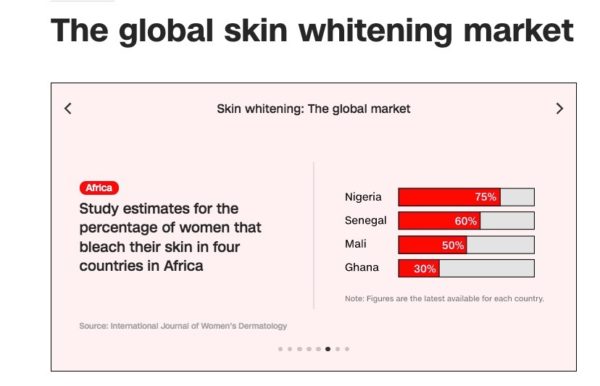 The global market for skin whitening was put at an estimated $8 billion in 2020 and projected to increase by nearly half of that figure within six years to hit $11.8 billion by 2026.

Also, creams dominate the market for skin-whitening products and are expected to hit $6.6 billion by 2027.

The Asia-Pacific market accounted for over half of the global revenue (54.3%) from skin-whitening products in 2018 and is expected to grow the most.

The rest of the world accounted for (45.7%) within the same period.

China was projected as being among the fastest-growing markets for such products.

Whitening products often contain toxic ingredients which, when used cosmetically for long durations without medical guidance, can both damage the skin and cause life-threatening ailments.

The chemicals used to lighten skin vary greatly worldwide and are constantly evolving.

They include antioxidants such as glutathione, vitamin C, and collagen.

Three ingredients have been listed as being the most common in harmful whitening products worldwide.

They include steroids, hydroquinone, and mercury, all of which are heavily regulated in most countries.

INTERVIEW: Those insulting my piercings are unadventurous, says BBNaija’s Arin