Naira Marley, the Nigerian singer, has shared a proverbial tweet after Mohbad terminated his contract with Marlian Records.

But on Tuesday, the ‘Feel Good’ crooner announced his exit from the label. He blamed his departure on the recent alleged assault on him by Naira Marley and his team.

He also accused the label of refusing to pay him his royalties from monetised intellectual content and advances as mutually agreed since 2019.

“In contravention of the terms of the arrangement between our client and yourself, you have failed to pay any advances as mutually agreed by both parties since 2019 till date,” a letter signed by Mohbad’s lawyer reads.

“You have also failed to pay all royalties due our client from all his intellectual property works monetized, released and utilised by you from 2019 till date.”

In a cryptic Twitter post on Wednesday, Marley talked about jealousy and insecurity from individuals who mock other peoples’ dreams.

“There are some people who put you down in life, mock your dreams, and challenge your personality; they look like winners. But in actual fact, they are only voicing out their insecurities and jealousy. Believe and accept yourself and hold onto what u believe in,” he wrote in the now-deleted post. 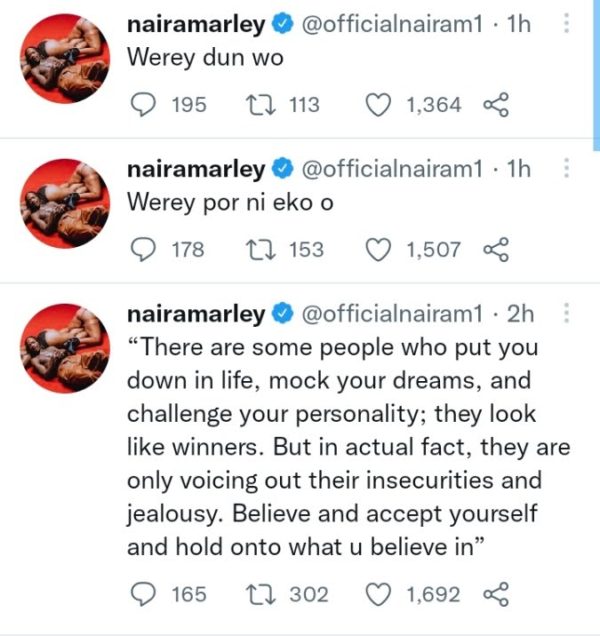 It remains to be seen if Naira Marley’s tweet is connected to Mohbad’s exit from his record label.

Mohbad had earlier called out the label’s management for allegedly assaulting him following his request for a new manager.

Marley, however, dismissed the singer’s claim. He also alleged that Mohbad was “high” when making the accusation.

I was patient for a long time before my breakthrough came, says Slimcase

Fela’s ex-band manager: Femi banned me from New Afrika Shrine for not working with him

Nkem Owoh: I tried to organise my own award ceremony — but failed