Moet Abebe: I don’t think I want to get married… it’s a major fraud

Moet Abebe, Nigerian media personality, says she is not interested in getting married because “it is a major fraud”.

The 31-year-old on-air personality spoke about her take on marriage during a question-and-answer session with her fans on Thursday.

In a series of posts on her Instagram story, Abebe admitted that although she doesn’t have much knowledge about marriage, she does not want to settle down as a wife.

“I don’t think I want to get married, it is a major fraud, but what do I know,” she wrote. 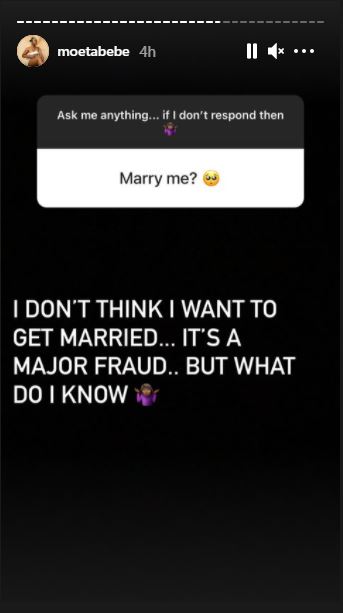 “I don’t think for those who fail to comprehend means the chances are unlikely. Not that it is 100 percent certain that this is the decision I will stand to for the rest of my life.

“Never did I say you people shouldn’t marry, but as for me, I’m not interested in it for myself, you see it as beautiful, I see it as a fraud.

“Good luck and be my guest, same way I also wish myself well with the decision I have made.” 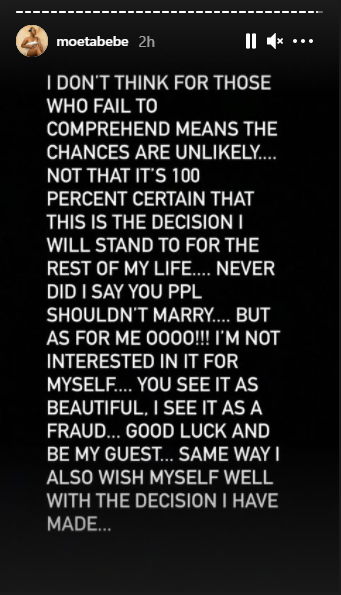 The University of Manchester alumna also fielded answers to questions regarding her height, favourite food, hometown, skincare routine, and activities that make her happy.

In 2017, the video jockey had stated that she’s not interested in being anyone’s role model.

Her comment then was on the back of criticism over a resurfaced video where she was jiggling her bum while clad in a bikini.

“I am in an industry where you have to express yourself the best way you know how… I’m here to make money and have fun doing what I was born to do.”

Adele files for divorce from husband

Don Jazzy gifts lady N200k for TV, decoder so she could watch BBNaija

He was hysterical without provocation, police finally speak on Praiz’s arrest