For many artistes in showbusiness, the guitar is just another instrument with which one merely creates some background component to the crooners’ vocals that mostly gets all the credit for both hysteric moments in concerts and massive digital streams.

Contrarily, some others learned to unravel emotions, deeply ingrained thoughts, and previously unexplored motives via the thrill that each guitar note delivers — thereby exuding a “music language” that leaves the audience bewildered. Yet, listeners only know the artistes that sing.

Initiating a movement to change this narrative, Ifiok ‘Fiokee’ Effanga, a Nigerian guitarist and showbiz mogul, mastered the physics of sound itself — building a brand that saw him feature a league of renowned musicians while making the rounds between Africa, Europe, and America.

In this interview with TheCable Lifestyle, Fiokee spoke on how the peculiarities in Nigeria’s music industry have further fuelled his zeal towards global recognition. He also shared his takeaway from the success of Norman Brown and George Benson, two renowned stars. 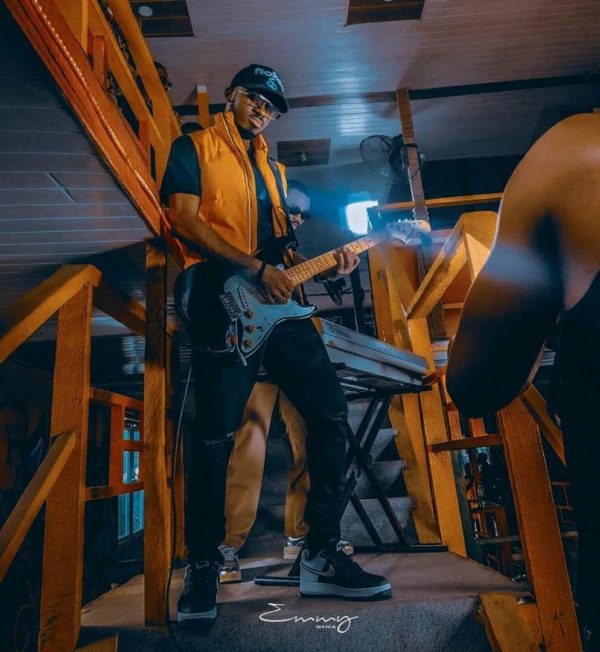 Most musicians have had their fair share of struggles breaking into the industry. What were your early days like and what would you attribute your incursion to?

In Nigeria, guitarists and other instrumentalists are highly underappreciated. People pay attention to the artistes that sing but not those behind the sound. Trying to break in as a guitarist was tough. They would often see us as church instrumentalists or people who play for beer parlours.

It has been crazy, that’s why it took me years to shape my brand. I wanted to change the narrative. I’ve been betrayed, rejected but my uniqueness kept me going. I’ve worked with many artists. I was D’banj’s guitarist for four years. I joined Flavour in 2014 and he helped project me out there.

Kiss Daniel, Adekunle Gold, Simi, Iyanya and Patoranking also don’t joke with giving me credits when I record on their projects. That’s how others started doing it. It was tough at the onset. But, now I’ve been able to consolidate my brand and this has helped guitarists like me grow.

Fiokee, what reassuring success milestones and achievements can you currently look back at such that you’re proud of how far you’ve come?

I won’t mince words stating that I’m the first Afrobeats guitarist featuring Nigerian hip hop artistes. The highest I’ve seen many other guitarists go is to record on artistes’ songs, some of which they end up not getting credited for. I’ve been able to set a structure for instrumentalists to be valued.

I’m registered with a publishing company in the UK. I have my record label as well. So, I’m not just a guitarist, I do music business now. In as much as I have to keep the sounds consistent so my fans get to enjoy good music, I don’t forget the business part of it. because that’s key to succeeding.

I’ve been able to break that barrier between instrumentalists and artistes, becoming a brand that can be reckoned with. I’ve recorded songs, featured Davido, Tiwa, Flavour, Peruzzi, and Teni. I’ve achieved these even when actual artistes are struggling with the same milestones. 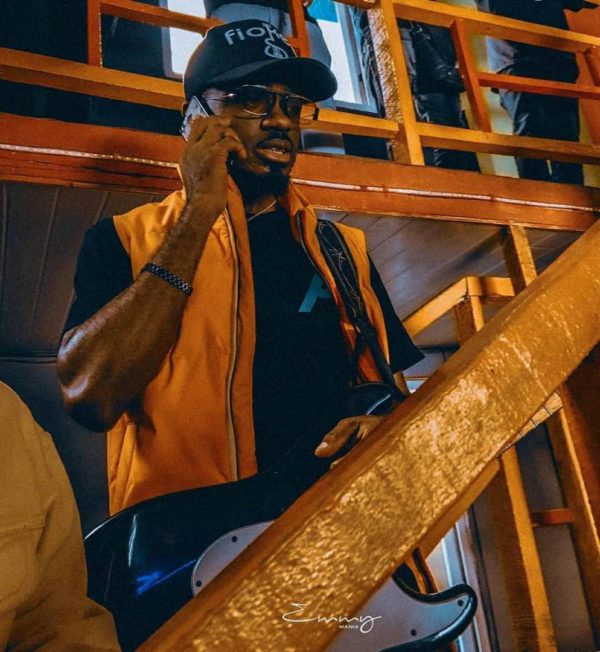 You’ve had to work with a league of prestigious singers including Tiwa Savage, Flavour, Reekado Banks, Simi, and Adekunle Gold. How has the experience been?

It has been amazing working with these artists. I was involved in Simi’s first-ever single ‘Tiff’. There were also other projects of hers I got to work on like ‘Love Don’t Care’, ‘Joromi’, and the whole ‘Simisola’ album. Adekunle Gold’s ‘Orente’, ‘Pick Up’, the ‘Gold’ album, and many others.

Since 2014, I’ve been recording with Flavour for ‘Thankful’ album and so many other of his hit songs. Then, if you had just one hit song, people call you a one-hit-wonder. So you needed more to show you’re not just some fluke artiste. We were able to give Kizz Daniel back-to-back hits. We were the producers behind Kizz Daniel’s hits from the 2014 ‘Woju’ to ‘Laye’ and ‘Good Time’.

What made artistes always come back to work with me was because I’d built a trusted brand such that, when artistes send us their projects, I was always able to interpret the music and speak both the mind of the artist and producer. I also turned in the project a day before the agreed date. 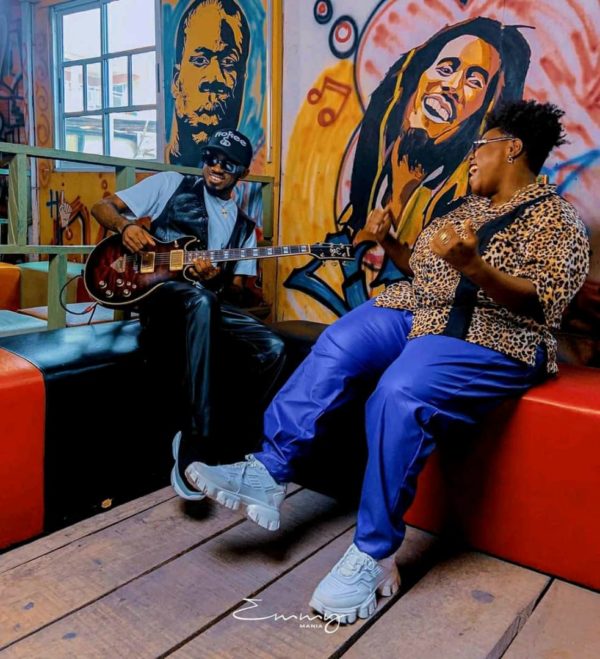 Considering the proliferation of artistes boasting of skills with a wide range of instruments, what’s has your creative process been? What attributes set you aside?

My creative process always happens in the studio. I always think of the next level, the next move, and how to remain relevant in the music scene while creating more value for my brand. Because, once you fail to continue offering that value, you could be suddenly knocked out out of business.

As an instrumentalist, one has to continually improve in one’s craft. For me, I do research, set the trend, and give artistes reasons to always come back. I’m currently creating my sound for my EP that is coming up. I’ll be doing a guitar EP separate from the ones where I feature artists.

I’ve been taking advantage of the COVID-19 pandemic to create more than for work. It has helped me. What stood me out in the craft is the way I see myself. I’m not just any regular guitarist you’ll meet on a normal day because I grew up making sure I don’t sound like anyone.

I decided I was going to see the guitar as my microphone while others see it as a mere instrument. When I play it, I assume I’m singing to a microphone as artistes do. My guitar has hidden vocals and it talks. I won’t proclaim myself the best there is in Africa. But I’m sure a different guitarist.

Being in an industry where creatives still go back and forth on ensuring that the monies from releases are beneficial to all stakeholders involved in their production, how would you say guitarists and other instrumentalists are faring financially?

You see, corruption isn’t just with politicians. It pervades every sector. Sometimes it even gets worse in the music industries. Instrumentalists are going through a lot. Some often call me to complain about producers or artiste releasing songs and not paying them for the guitar they recorded.

My growing up in the industry was frustrating. The lack of structure is frustrating to young instrumentalists. I’ve been able to secure myself in the sense that I have a structure that works and a brand to be reckoned with. I have lawyers. It’s either we talk percentages or pay-for-hire deals.

Upcoming instrumentalists often look for artistes’ songs to play on so they could ride on the platform and artistes tend to take advantage of this. Once they merely give guitarists credits, they think they’ve done so much, forgetting that these people have bills to pay and families to feed.

Challenges like these are what we face in the industry. It’s sad that Nigerian artistes don’t have a conscience. People must take advantage of you. Some release and don’t give you credits. Some others didn’t even pay.

So many Nigerian artistes just took advantage of me on many occasions. I just let the conflict slide while channelling my energy positively so I could focus on creativity and make a brand statement. With all that was done to make me give up during my early industry days, I’m still here thriving. 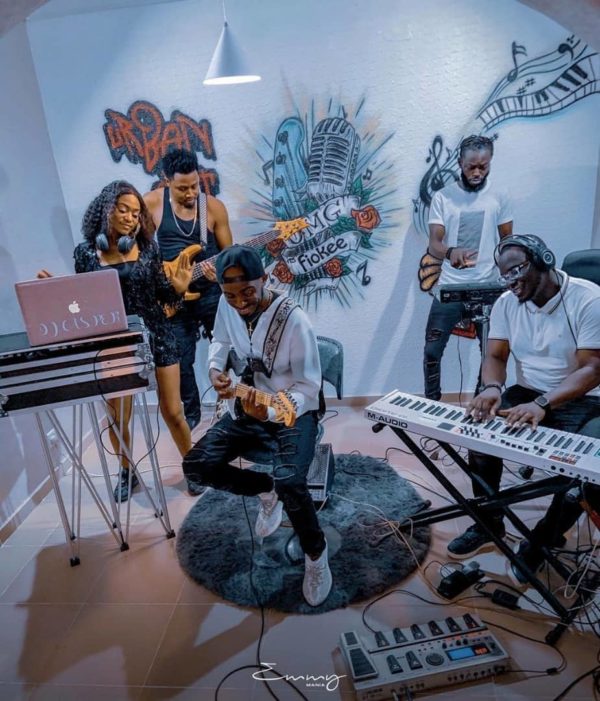 What challenges have you had to grapple with? Are there misconceptions, a mutual understanding gap that guitarists still face when working with Nigerian musicians?

People always want you to remain in a spot where they’ll always come back to you. They don’t want you to grow. So anytime they see you trying to grow your brand, you could become a threat to them. This is exactly what Is happening in the industry.

Some didn’t believe I could move from being just a guitarist to a brand featuring other artistes. Shout out to Reekado Banks, Teniola, Davido, Tiwa Savage, Flavour, Peruzzi, and others who came on board. Some others wanted me to remain just someone they’ll always hit up for recording.

One laudable thing is, however, the renewed awareness among writers and creative producers. Everybody is now awake. Gone are the days when artistes claim 100 per cent publishing right, take advantage of others. Afrobeat opened eyes. In the industry, producers are now getting royalties.

Everybody knows what’s theirs. You can’t do a song and want to claim everything. Everybody has to share. No matter how small it is, when you wake up and get royalties, you would be encouraged to do more. That’s what I do on my own part as well. But we still need a particular body to protect us.

We’re still growing, learning. Artistes are still taking advantage of the younger instrumentalist. Some of them still report to me and it’s saddening because I know their struggles.

To play one instrument take a whole lot of time. But, when some artiste that can’t even play a jack takes advantage of you, I keep wondering if they have a conscience. Ultimately, it boils down to how Nigeria’s system has been structured from the beginning. We don’t have a system at all.

How about COVID-19? How has the lockdown been affecting your likes and what thoughts have you on the measures being taken by the government to contain it?

COVID-19 has really hit the industry in general. I’m a state reformer, I always work with Flavour, travelling for events around Africa, Europe, and America. I was supposed to go for a US tour and the UK as well but everything was abruptly cancelled. It’s devastating. My visa works but I can’t use it.

Back in Nigeria, everyone is indoors in the music industry. No shows; no event. Artistes channelled their energies to being creative in the studio. Thank God I have a studio in the house to work with. It has eaten into our income flow because these are where we make money from.

For artists, they are now depending on their digital income, direct from digital sales. That’s why we’re trying to build our fan base from the digital market, not the physical. This includes the likes of iTunes and Spotify. We’re channelling our energy to promote our content in the digital market.

I would have dropped another song. But I’m trying to check out how the system now works. I’m working on my EP and it’s going to be just guitar. I’ll also drop my next single in preparation for my next body of work. I hope to push this to a global level until an international body recognizes me. 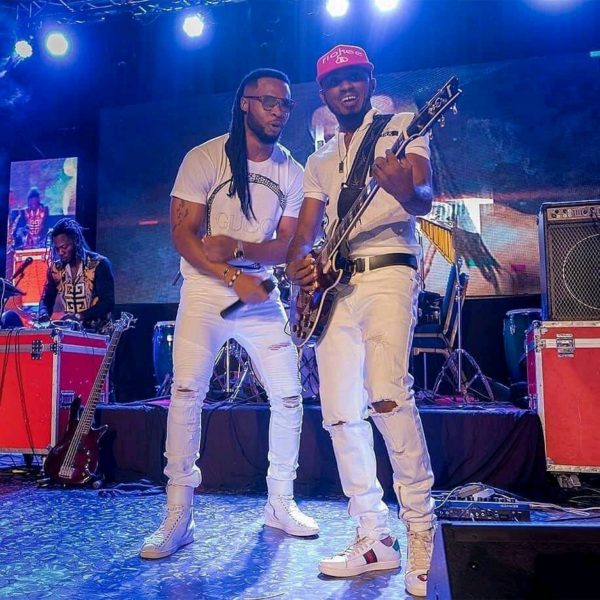 How about a piece of advice for youngsters who intend to become instrumentalists someday and make a living from it? What would you say to fans out there?

To my fans, I will continue to give good sounds. Thanks for appreciating me. Your feedbacks are valued. For upcoming guitarists, I’m here to give you confidence but don’t be in a hurry to hit. I’ve come across young guitarists that feel they could put anything on social media and earn accolades.

Whether or not you get it right, people will say, “nice one.” Many youngsters are jumping the stages and learning process. Their depth is floating. It doesn’t work that way! I’ve played guitar for twenty years. But even if you can hit the money in five, you still need to do your homework to stand out.