HBO, satellite television network, was recently hit by hackers, with scripts of Game of Thrones carted away by the perpetrators.

Since the hack, fans and crew at the company have feared this day may come, and now it has.

The fourth episode of the ongoing seventh season has been leaked online on Reddit but according to The Verge, the leak didn’t come from the hackers but through a distribution partner.

The leaked episode, slated for release on August 6 in the US and August 7 in India, is said to be original, although low in quality. 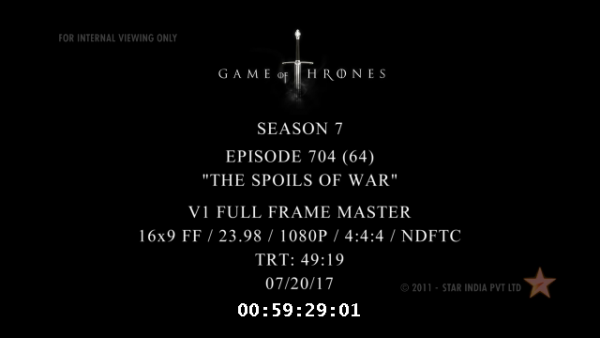 According to Gadgets 360, the leaked episode has the date tag from the release of the new season, signaling its genuineness. However, the website also reports it may also likely not be the episode’s final cut.

The hit series isn’t HBO’s only hacked show on the network.

Unaired episodes of HBO series ‘Insecure’ and ‘Ballers’ were released by the hackers when they stole about 1.5 terabytes worth of material.

This won’t be Game of Thrones’ first hit as episodes of the series have found their way to the internet in previous seasons.

After the recent attack, the company released a statement after the hack saying law enforcement and cyber security firms were looking into the theft in order to protect and restore the stolen data.

It is unclear if the hackers have full episodes as they have only published scripts outlines on the internet.