Gbenga Abiodun, better known as DJ Olu, was on Thursday laid to rest.

Davido alongside his manager, Asa Asika, and cousin B-Red, among other celebrities, were in attendance. 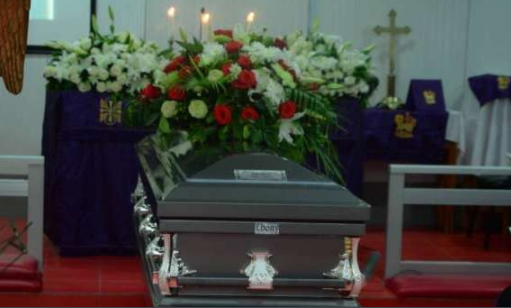 DJ Olu’s service of songs was held on Wednesday at Olaniwun Ajayi Gardens, Banana Island, with his friends and family members in attendance.

The 25-year-old son of oil magnate, Dapo Abiodun, was found unconscious in his car, alongside a friend identified as Chime Amaechi on October 7.

Sequel to this, many allegations have been made regarding his death.

An autopsy report is yet to be released by the police but substances suspected to be hard drugs were said to have been found in the car.

The disc jockey is his second close associate of Davido to die within a week.

Tagbo Umeike, boyfriend of actress Caroline Danjuma, had earlier died after partying with Davido. The police say an autopsy report showed that he died from suffocation.

An investigation is still being conducted to unravel the circumstances surrounding Umeike’s death.

Rahama Sadau: Any disrespect to my religion over those photos remains condemned