Annie Idibia, Nigerian actress, has fired back at Charles Idibia, brother to 2Baba, after he called her out over her social media rant about the musician.

The film star has been in the public eye after she criticised her husband for allegedly spending nights with one of his baby mamas on the ground that he’s visiting his kids.

She had also claimed that 2Baba’s “family never liked me” from the outset of their marriage despite her sacrifices to keep the union.

Reacting, however, Charles had slammed the film star, describing her claims as “lies”. He had also said his brother is “dying slowly” due to the “unhappiness” in his marriage to the movie star.

Annie, however, took to the comment section of the now-deleted post to lambast Charles, saying he’s “lazy” because his brother is successful.

The model and entrepreneur said her husband is tired of Charles and other members of his family because “everyone is trying to suck him dry.”

“Maybe you all don’t know that your brother is tired. Everyone trying to suck him dry. Because you have a successful brother, na that wan make you lazy. Sad!” she wrote.

She also took a swipe at her brother-in-law for insulting her mother despite the fact that he’s “living under my roof.” 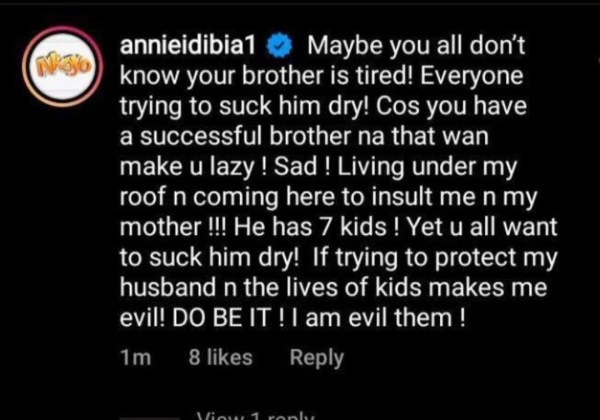 Annie added that she remains unperturbed by those calling her “evil” over what she described as an attempt to “protect my husband and kids.”

“Living under my roof yet coming here to insult me and my mother. He has 7 kids yet you all want to suck him dry. If trying to protect my husband and kids makes me evil, so be it. I am evil then,” she added.

2Baba is yet to react to the issue as of the time of this report.

Toke Makinwa: Men with nothing to offer run from successful women