Aisha, daughter of Abba Kyari, late chief of staff to President Muhammadu Buhari, has asked her father’s critics to let those mourning him do so in peace.

Kyari had died from COVID-19 complications on April 17, a few weeks after he had tested positive for the novel disease, following an official trip to Germany and the UK.

Before he passed on, quite a number of Nigerians had taken to social media platforms to ask the federal government to declare his whereabouts after he was moved to a private facility for treatment.

But on Monday, Aisha took to her Instagram story to pour out her mind to the likes of Lola Omotayo, wife of Peter Okoye, hoping they are now “sleeping better at night” since he passed away.

“My daddy, Abba Kyari is gone. Evil ones still won’t shut up. You all claimed he was the root of your problems when he was alive, now he is gone, surely all your problems died with him,” she wrote with the user name (@crackeddiamond).

“Allow us that love him mourn in peace. And dear Lola Omotayo and co that were so curious about his whereabouts, I hope now that you know exactly where he is, you’re sleeping better at night.” 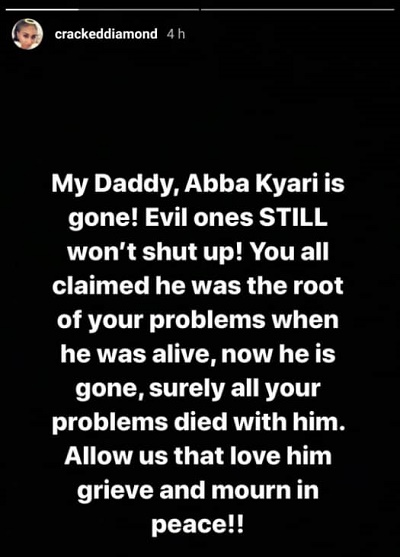 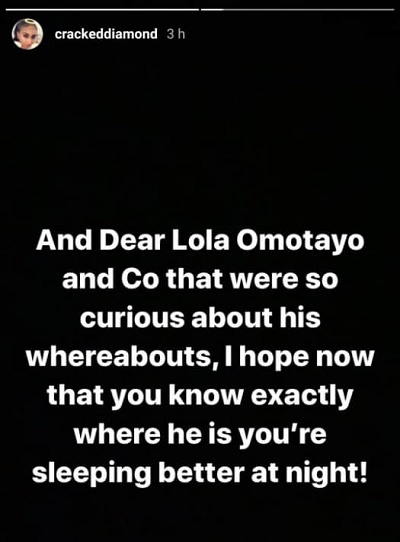 Femi Fani-Kayode, a former minister of aviation, had earlier lashed back at Nigerians critiquing his tribute to the late chief of staff, stating that he had no need for their validation.

In a now-deleted clip, shared via her Instagram page, Omotayo had called on the Lagos health commissioner to be more accountable with respect to information on Kyari’s health.

‘‘Guys, so the Lagos state commissioner of health just said he doesn’t know Abba Kyari is currently located. Abba Kyari is Buhari’s Chief of Staff and we don’t know where he is?,” she had asked.

“Whether he is in Lagos receiving treatment or in Abuja at home, self-isolating, did he even go anywhere to get treatment, or is he out of the country? Nobody knows.

Kanayo O Kanayo joins politics, to run for house of reps in 2019

You blew the chance to unite your country, Piers Morgan tells Meryl Streep