Southeastern states have topped the list of 195 candidates indicted for exam malpractice across the country during the 2020 Unified Tertiary Matriculation Exams (UTME).

On Monday, the Joint Admission and Matriculation Board (JAMB) had published the names of the indicted candidates on its weekly bulletin as well as their infractions and the states wherein they sat for exams.

While a total of 1,945,983 candidates wrote the UTME in the year under review, JAMB stated that cases of misconduct were reported across 30 states of the federation including Abuja.

An analysis of the publication showed that states in Southeastern Nigeria, including Anambra and Imo topped JAMB’s misconduct list with 16 and 28 indicted candidates respectively.

Other enlisted states in the zone are Enugu, where a total of 15 candidates accused of misconduct had written their exams; Abia, with nine reported cases; and Ebonyi with three recorded culprits.

These figures leave the southeast geopolitical zone accounting for a combined 71 candidates, a figure which represents 36.4 percent of the total 195 indicted by JAMB for the year 2020.

With Gombe, Sokoto, Adamawa, and Yobe state reporting only one case each, JAMB’s report also shows that malpractices were more predominant in the south than northern Nigeria.

However, worthy of note is that Katsina, Bayelsa, Kebbi, Niger, Zamfara, and Taraba were said to have reported no cases at all as Benue, Delta and Kogi states recorded two culprits each.

JAMB’s report also shows that the offences for which the said candidates were found culpable span exam by proxy, connivance to cheat, smuggling of electronic devices including smartphones.

Others are unruly behaviour, double registration, tampering with examination documents, forceful entrance into exam halls as well as the faking of vital credentials required to sit for UTME.

Of these infractions, candidates who indulged in taking their UTME by proxy appeared to have dominated the list, with 89 candidates out of the 195 found wanting for this alone.

Closely following is connivance to cheat, which contributed to 26 of the indicted candidates; attempting to cheat, for which 24 were nabbed; and smuggling of mobile phones, which scored 23 candidates. 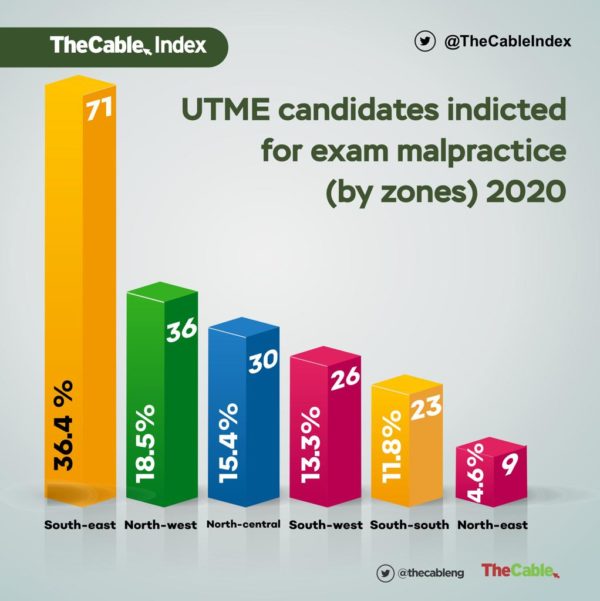 JAMB had initially stated that it handed 180 UTME candidates to police authorities for prosecution over alleged malpractices but the figure would later increase after investigations.

The board also suspended 47 registration centres across the country and threatened to prosecute 38 owners of accredited Computer Based Test (CBT) centres in a bid to fight various malpractices.

TCL Fiction: After these eerie days (This black girl)