May Edochie is among the social media users who liked a post by Georgina Onuoha — in which the actress called out Yul Edochie, her husband, for bragging about polygamy.

In April, Yul announced the arrival of a child with Judy Austin. He also flaunted her as his second wife — to the chagrin of May.

His action had generated mixed reactions across social media platforms.

On Thursday, the controversy on polygamy heightened when the actor bragged about the blessings that have come to his household since he took a second wife.

The 40-year-old film star had backed his claim with reference to some “great men in the Bible” who trod that path.

But Onuoha slammed him for his remark, arguing that he shouldn’t have married a second wife without the consent of his first wife.

The actress said although marrying a second wife isn’t a crime, Yul’s approach to polygamy was “wrong”.

Onuoha further accused Yul of “committing adultery and disrespecting” his first wife, adding that he has “failed traditionally, and scripturally”. 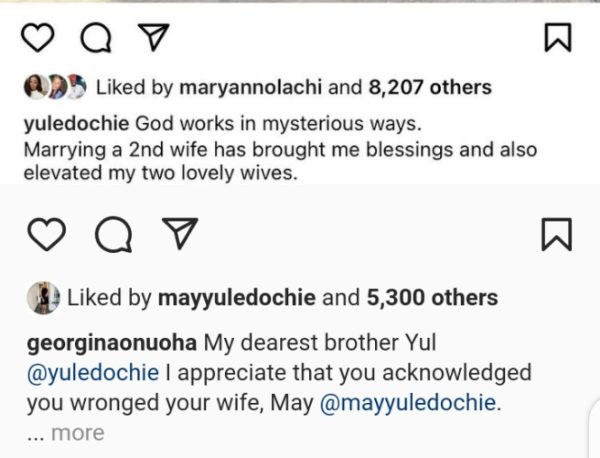 May had earlier kicked against her husband’s decision to take a second wife.

“My family and faith absolutely do not practice polygamy, although it works for some people,” she had said.

Beyonce: Having miscarriages taught me a lot about motherhood