You’re nothing without the media, Yomi Casual tells modern-day celebrities

Olorunyomi Makun, the fashion designer better known as Yomi Casual, has urged modern-day celebrities to respect their older colleagues who made it before the advent of social media.

But as soon as the platforms were back online, Yomi Casual took to his Instagram to commend the celebrities who gained fame before the social media era.

He added that said the recent outage should serve as a lesson to both online vendors and celebrities that they cannot flourish without the online mediums. 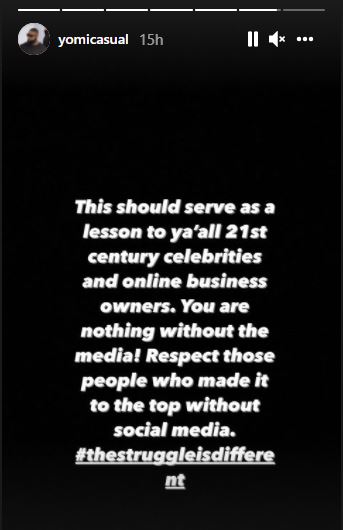 “This should serve as a lesson to y’all 21st century celebrities and online business owners,” he wrote.

“You are nothing without the media! Respect those who made it to the top without social media. #thestruggleisdifferent.”

The 36-year-old stylist has continued to pull the strings in the country’s fashion landscape with numerous beautiful collections.

He had last year recounted how suspected hoodlums looted his fashion store in Lagos during the #EndSARS protest that rocked the country.

“Woke up to this and the first thing that came to my mind is, it’s already too late to educate the hoodlums that this fight is for all of us and not at each other,” he had written.

Jay-Z: I love Kanye West — I’ve always been like his big brother