Katrina Jones, former BBNaija housemate better known as Ka3na, has called out Ada Ameh, the Nollywood actress, over her comment on Kemi Olulonyo.

Ameh recently took to her Instagram page to lambast Olulonyo over her controversial comments on the death of Sylvester Oromoni Jnr, the 12-year-old student of Dowen College.

Oromoni was alleged to have been attacked by “some senior colleagues” for refusing to join a cult group.

But Olunloyo had claimed that the late student allegedly agreed to join the cult group and drank engine oil as part of the initiation process which eventually led to his death.

The self-acclaimed journalist’s comment did not go down well with a lot of Nigerians who berated her over the narrative.

Joining the fray, Ameh had in an Instagram video called Olulonyo a number of derogatory names such as “mad woman”, “a mentally derailed person”, “an animal” and “one who had no feelings for what happened to Oromoni.”

Ada’s method of addressing Olulonyo, however, infuriated Ka3na, as the reality TV star took to her Instagram stories to lambast the actress.

“It takes madness to identify another! Ada Ameh you go soon meet your match. It’s so easy for you to insult people!” she wrote.

“I let the first time you insulted me slide because I still had some respect for your age but as of this moment no try am again…You’re becoming a nuisance seriously”. 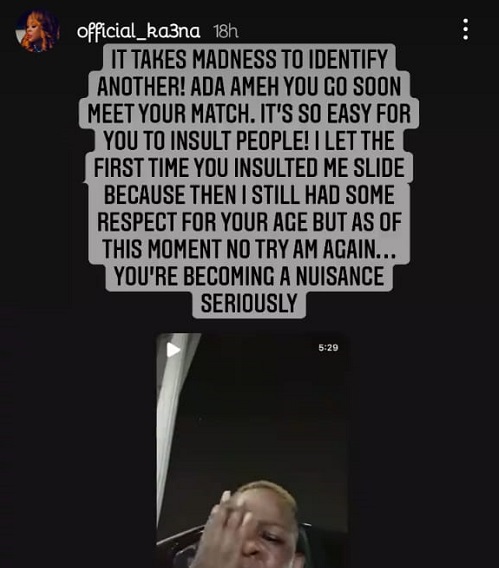 In a follow-up post, Ka3na said she’s not supporting Olunloyo but faulting Ameh’s “penchant for always correcting people with insults”.

In February, Ada had tackled Ka3na over the way the reality star reacted after a female fan tattooed her name on her thigh.

Ka3na had earlier slammed the fan, while also denying allegations that she requested the tattoo.

Yul Edochie: How my father gave me beating over thought to dump school

Put pressure on FG to do more in north-east, Femi Kuti urges celebrities